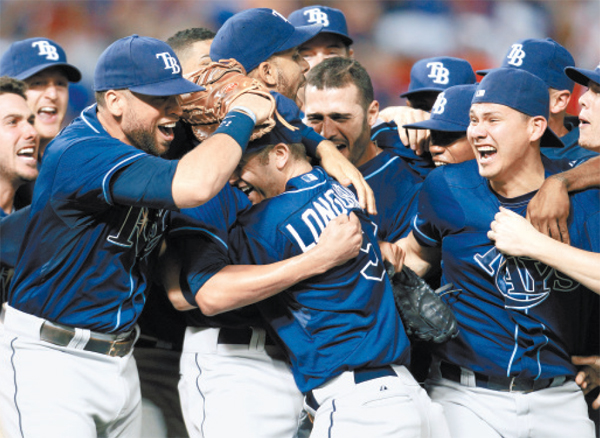 The Tampa Bay Rays celebrate after beating the Texas Rangers in the American League wild-card tiebreaker game on Monday in Arlington, Texas. The Rays will move on to face the Cleveland Indians in the wild-card game. [AP/NEWSIS]

ARLINGTON, Texas - David Price, Evan Longoria and the Tampa Bay Rays are going to the playoffs again, getting there with a victory in their final regular-season game for the second time in three years. Price yelled after the two locked eyes, and they embraced to start the celebration.

They needed an extra game this time.

Price threw his fourth complete game of the season, Longoria had a two-run homer and the Rays beat the Texas Rangers, 5-2, in the AL wild-card tiebreaker game Monday night, the 163rd game for both teams.

Luckily for manager Joe Maddon and the Rays, they weren’t done in by another blown call in Texas - though this one did cost them at least a run.

The Rays face another must-win situation Wednesday night at Cleveland in the AL wild-card game - the winner will face Boston in the division series. Tampa Bay, in the playoffs for the fourth time in six years, won four of six from the Indians during the regular season.

Price (10-8), the reigning AL Cy Young winner, had a 10.26 ERA in four previous starts at Rangers Ballpark. He was superb in this one, striking out four and walking one. He picked off two runners while allowing seven hits and throwing 81 of 118 pitches for strikes.

The 28-year-old lefty reached 10 wins for the fifth straight season. He missed more than six weeks because of a triceps strain but is 9-4 in his 13 starts since returning July 2 from his first career stint on the disabled list.

Texas had won seven in a row, needing every one of those wins just to force the majors’ first wild-card tiebreaker since 2007.

Cruz, who had 27 homers and 76 RBI in 108 games before his suspension, was 0 for 4 with a strikeout while hitting sixth as the designated hitter. His groundout to shortstop ended the game.

The Rays had runners at first and second with two outs in the seventh when Delmon Young, who put the Rays ahead to stay with a sacrifice fly in the first, hit a soft fly ball.

Center fielder Leonys Martin made a running, diving play to catch the ball. Replays showed clearly that the ball bounced into Martin’s glove. But third base umpire Ron Kulpa, looking at the play from the side, ruled it an inning-ending catch.

The first four hitters in the game against rookie left-hander Martin Perez (10-6) combined for three singles and a walk, and yet the Rays still didn’t have a run.

Desmond Jennings, in his first start in more than a week after left hamstring tightness, hit the game’s first pitch down the left-field line. He was thrown out trying to stretch the hit to a double when left fielder Craig Gentry, who even with the return of Cruz stayed in the lineup because of his hot bat, made a strong throw. Will Myers walked on four pitches before consecutive singles by Ben Zobrist and Longoria loaded the bases. A run finally scored on Young’s sacrifice fly.

Tampa added a run in the ninth when Sam Fuld was at second base, when he took off for third base. Reliever Tanner Scheppers threw wildly to third base, allowing Fuld to score.