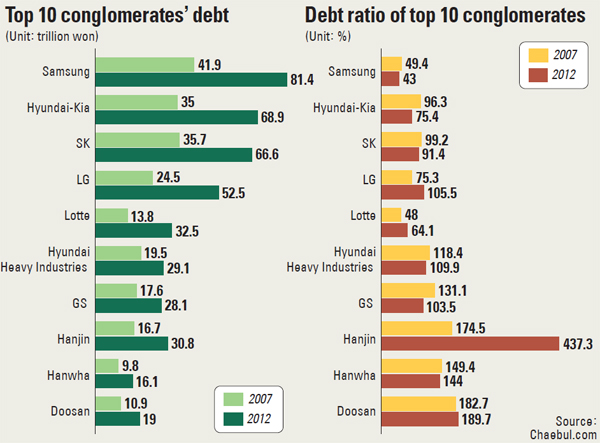 The combined debt of Korea’s top 30 conglomerates is much larger than the debt predicted next year for the entire nation.

According to Chaebul.com, the debt held by the top conglomerates including Samsung and Hyundai Motor as of end of 2012 amounted to 574.9 trillion won ($535.2 billion).

The Web site specializing in analyzing the nation’s conglomerates stressed that the total debt increased 83.2 percent compared with 313.8 trillion won at the end of 2007, the year before the global financial crisis.

The debt, however, does not include that of financial affiliates.

The total debt of Samsung expanded 94.3 percent compared with 2007 from 41.9 trillion won to 81.4 trillion won. Among the nation’s conglomerate, it has the largest debt. However, the leading conglomerate is not in critical condition and its debt-to-asset ratio is below 45 percent.

Other conglomerates in the top five saw their debt size increase.

Although debt size has increased, most conglomerates’ debt-to-asset ratio improved even when compared with 2007. The average debt ratio last year was 88.7 percent; in 2007, it was 95.3 percent. A lower ratio means that the conglomerates’ financial situations improved.

However, Chaebul.com stressed that when excluding the two largest conglomerates - Samsung and Hyundai Motor - the debt ratio of the remaining 28 companies was 115.4 percent, a 1.7 percentage point increase from 113.7 percent in 2011. Chaebul.com said that troubled conglomerates such as Tongyang, STX, Kumho, Dongbu, Hanjin and Hyundai Group are at a critical level with debt ratios exceeding 200 percent.

On the contrary, there were 10 conglomerates whose debt ratio is below 100 percent, including Samsung. In 2007, Samsung’s debt ratio was on the tipping point of 50 percent.