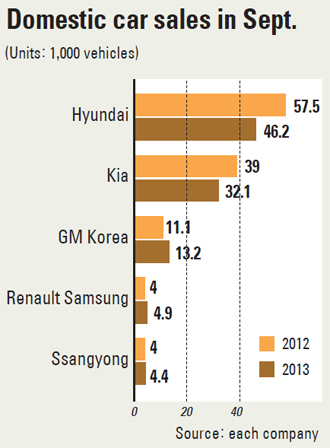 September was a painful month for the nation’s top two automakers, as Hyundai Motor and Kia Motors suffered steep declines in domestic sales.

The two automakers under Hyundai Motor Group blamed production disruptions due to labor issues and fewer business days because of Chuseok.

It was a good month for Renault Samsung Motors, though, as the last-place automaker passed Ssangyong.

According to company data, RSM sold 4,957 units in Korea in September, up 23.8 percent from a year ago, to pull ahead of Ssangyong which sold 4,432 units last month, up 9.8 percent from year earlier.

RSM had been was the worst-selling automaker each month this year.

However, Ssangyong, owned by India’s Mahindra, still leads RSM in cumulative domestic sales for the first nine months of this year at 44,644 units, compared to 41,450 for RSM.

Meanwhile GM Korea, the nation’s third largest automaker, rolled to 13,252 sales, up 18.5 percent from a year ago. It was the largest monthly domestic sales figure for the company in this year.

GM Korea said its Chevrolet Spark citycar sold 5,514 units, leading the sales increase. And the Cruze compact and Orlando crossover utility vehicle had their best month of the year.