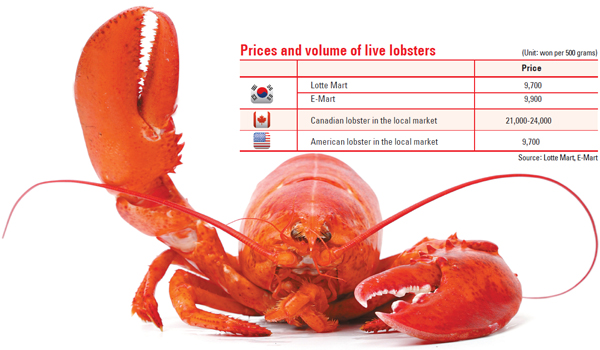 Lotte Mart and E-Mart are doing battle with live lobsters, following their price war over autumn and winter clothes last week. It is the first time the large discount retailers are selling live lobsters at less than 10,000 won ($9.30). Both started to stock up two to three months ago.

Lotte Mart has a comparative advantage in terms of price, retailing 500 grams (17.6 ounces) of U.S. lobster at 9,700 won at 20 stores, including Jamsil and Seoul Station. The price is almost half the market price of Canadian lobsters sold for 21,000 won to 24,000 won.

E-Mart is challenging the competition with live lobsters at all of its stores nationwide for 9,990 won from today through next Wednesday. It has prepared 100,000 lobsters, five times the number at Lotte Mart, through direct air shipments from the Northeast United States.

“Considering the minimum wholesale price of live lobsters of similar quality at more than 12,000 won, ours are about 20 percent cheaper,” said a spokesman for E-Mart.

The competition has been heated between the two retail giants, with E-Mart saying its competitor is retailing only a small amount of the 20,000 lobsters at 20 stores across the country. Lotte Mart said its merchandise directors visited the producer in the United States and it selectively imports excellent products only after testing. Both stores expect the lobsters to be extremely popular given concerns over radioactive contamination of fish from Korean and Japanese waters.

“Also, generally when the weather becomes chilly, demand for steamed dishes and soup dishes that include fish increase, so we hope the shrinking fish consumption will also revive,” said Lee Kyung-min, head of the fisheries division at Lotte Mart.

“Starting with the lobster as a representative seafood for steamed dishes, we plan to continuously introduce various fish products from overseas.”

Meanwhile, E-Mart said it is operating a marina in the East Sea for the first time to maintain freshness and manage the huge volume of 100,000 live lobsters.

The reason for importing such a large shipment is because consumption of high-quality crustaceans has been skyrocketing with rising national income and growing consumer preference for foreign fish.

According to the Bank of Korea, gross per capita income posted a record high of $22,708 last year.

For the past two years, sales of crustaceans such as lobsters and snow crabs at E-Mart have increased 10-fold each year.