Officials at Tongyang Securities’ Myeong-dong branch in central Seoul have been busy since the Financial Supervisory Service launched a special inspection into the brokerage firm of cash-strapped Tongyang Group last week, as part of efforts to make sure that investors’ deposits in Tongyang affiliates are being managed safely. Yesterday, three affiliates filed for court receivership programs. [NEWSIS]

Having failed to pay back more than 100 billion won ($93.1 million) in debt due yesterday, cash-strapped Tongyang Group filed for court receivership for three of its affiliates to avoid bankruptcy, the conglomerate said yesterday.

The three are Tongyang Corporation, Tongyang Leisure and Tongyang International.

“It was an inevitable choice for us in order to maintain [the value of] assets, which, in the end, will help protect investors,” the group said in a statement.

Filing for court receivership will shield the affiliates from financial claims or other pressure from creditors while keeping them from disposing of assets without the court’s permission. It will also help the conglomerate prevent the share values of the affiliates from falling further.

The country’s 38th-largest conglomerate had been scrambling to secure liquidity to pay back debts before their due dates. Last week, the conglomerate reportedly asked Orion Group for financial help, but that request was rejected. 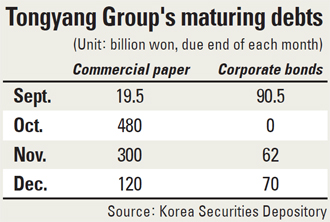 Tongyang Group also tried selling affiliates to secure funds. Most recently it put Tongyang Power up for sale, but no buyer stepped forward. The group was hoping to rake in up to 1 trillion won in the sale.

“I feel a great responsibility as chairman for the executives that have put so much effort into restructuring in such a limited time and also for customers and investors who put their trust in the group,” said Tongyang Group Chairman Hyun Jae-hyun. “We will be able to minimize investor damage if the sales of affiliates and their assets [in the future] are pushed based on thorough planning and in an orderly manner, yielding their maximum value.”

Industry sources note that in addition to the three affiliates, Tongyang Networks will probably also file for court receivership, while a debt workout program for Tongyang Cement may be in the offing.

Although the conglomerate was able to put off the immediate fire, another is around the corner. More than 1 trillion won in debt needs to be paid before the year’s end.

Previously, the conglomerate was able to pay back debts by selling corporate bonds and commercial paper through its affiliate Tongyang Securities.

That will no longer be possible because of a change in the law from later this month that prohibits brokerage firms from selling low credit corporate bonds from affiliates.

The measure was announced by the Financial Services Commission in July to normalize the frozen corporate bond market and to protect retail investors.

In the meantime, Financial Supervisory Service Governor Choi Soo-hyun said yesterday that the regulator will do its best to minimize investor losses.

However, Choi did note that people who invested in the commercial paper of Tongyang Leisure and Tongyang International, and in corporate bonds issued by Tongyang Corporation, will face some losses.

The fate of investors will depend on the court’s success in turning the companies around.

According to the FSS, as of Sunday, Tong Yang Leisure and Tongyang International have sold a total of 458.6 billion won worth of commercial paper through Tongyang Securities.

A total of 13,063 investors have bought them, of which 99.2 percent are retail investors.

Also, Tongyang Corporation issued a total of 872.5 billion won worth of corporate bonds through the brokerage affiliate that 28,168 investors have invested in.