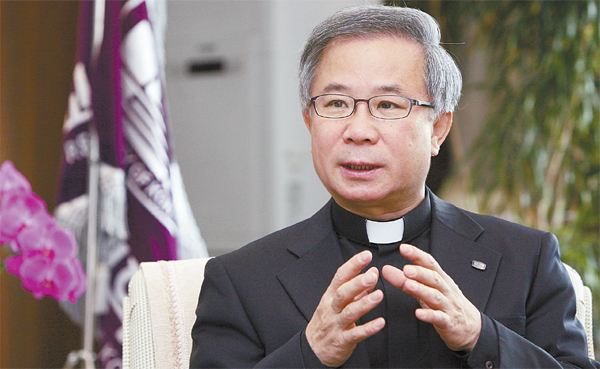 Fr. Johan Pahk Yeong-sik believes that Catholic humanism is the solution to the challenges of modern society.

The third Bernard Wonkil Lee (BWL) International Forum for Catholic Humanism will be held today at the Catholic University of Korea in Bucheon, Gyeonggi. Eminent scholars, priests and students from Korea and abroad will share their thoughts on Catholic humanism and seek solutions to several problems in society.

For the past three years, the annual forum has been focusing on the origins of life and humanity. Prior forums held discussions under themes such as “Catholic Humanism: From Meeting Someone to Forming a Community” and “Compassion and Justice.”

Under this year’s theme, “Life: Beginning of Beings,” the forum aims to deepen discussions on the origin of the meaning of life and existence. The topic will be expanded next year to cover “Marriage and Procreation.”

The BWL International Forum for Catholic Humanism was named in commemoration of the late Bernard Wonkil Lee, who dedicated his life to helping his neighbors with his sincere faith.

Yesterday, the BWL Catholic Humanism Award ceremony was held for the first time. The award was established to commemorate people who have led exemplary lives in fields related to the forum’s theme.

Speakers at the forum include Dr. Matthew Duksun Lee, founder and chairman of Allied Technology Group, and Reverend Paul Dukhyo Lee of the Archdiocese of Washington.

Other speakers include John F. Haught, professor of theology at Georgetown University, who will speak on “Human Dignity after Darwin: Catholic Identity in the Age of Evolution.”

The afternoon session will consist of a symposium hosted by the Research Institute of Anthropology at CUK. The symposium will be followed by the student participation program, which comprises the third Students Debate Contest and the second International Student Speech Contest.

The Catholic Church believes all problems in modern society are based on the problems of people, who then create social problems.

Cultivating humanism in the minds of students is an essential way of grappling with these challenges of modern society, said Fr. Johan Pahk Yeong-sik, president of the Catholic University of Korea (CUK).

“Smart but selfish people’s sense of competition directed in wrong ways is the root cause of our society’s crises,” said Pahk.

With competency as a given quality, ethical and trustworthy leaders with genuine concern for humanity are the type of leaders this society needs. Under his leadership, CUK has been focusing on nurturing humanism in its students by stressing integration and communication.

For example, the Ethical Leaders Rearing Program (ELP) is a distinguished syllabus at CUK that trains students to value moral principles, respect life and humanity, and gain creative problem-solving skills. Students must take courses in subject curricula as well as classes in humanities and problem-solving, after which they will receive a certificate from the president and a scholarship.

Those students are also prioritized for student exchange programs and global explorer programs, as well as in job recommendations. ELP participation is recorded on their transcripts, and the students are granted various other privileges.

CUK has been running various other programs that directly offer students the opportunity to take care of the needy and give back to society. The university’s International Volunteer Service Team, composed of professors, employees and students, which visits developing countries every summer, was awarded by the Ministry of Health and Welfare in September for its excellence.

The University’s globalization strategy is unique, too. In today’s world where globalization is no longer just an option, many universities are sending their students abroad.

Instead, CUK decided to embrace “Inbound Globalization.” In other words, foreign professors and students are invited to the campus, and students are encouraged to learn foreign languages and acquire a global mindset while remaining in Korea.

The Cardinal Kim Sou-hwan International Center is the base camp for inbound globalization, accommodating 1,200 Korean and foreign students and foreign professors. The facility features an all-English dormitory, where freshmen are required to reside in order to experience global living.

In the dormitory, the Global English Outreach Program helps students practice English all year around through the means of conversation classes, pop songs and practicing presentations.

“I am confident that ‘University 3.0’ will define the future of Korea’s education. The Catholic University of Korea will lead the way by promoting communication and harmony, instead of conflict and division.”