Rumors swirl after Ri retires to the shadows

Rumors swirl after Ri retires to the shadows 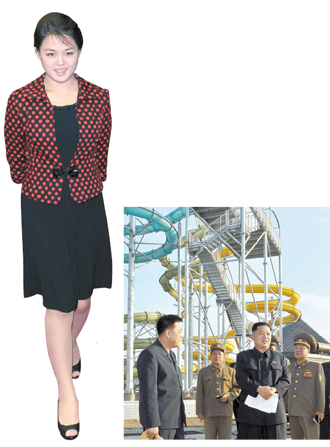 North Korean leader Kim Jong-un makes an inspection visit to the construction site of the Munsu Swimming Complex in Pyongyang, without the accompaniment of his wife, Ri Sol-ju(left), in this undated photo released by North Korea’s KCNA on Sept. 23. [REUTERS/NEW1]

Ri Sol-ju, the first lady of North Korea, has not been shown at any public occasions by the state media following rumors that she was involved in the recent executions of some orchestra members charged with sexual misconduct and praising capitalism.

In addition, the Unhasu Orchestra, a state-run orchestra that Ri used to sing with, has not participated in any public events publicized by the state-run media.

Ri also disappeared for more than a month earlier this year at the end of her pregnancy.

South Korean government officials are paying close attention to her recent disappearance. Ri did not show up when Kim Jong-un visited a water park in Pyongyang on Sept. 22, the kind of event that she attended in the past.

According to rumors, some Unhasu Orchestra members recently took a trip to Europe and praised capitalist life and Christianity after the trip. Some of them were involved in sexual assaults during the trip, including head of the orchestra, Mun Kyong-jin.

On Sept. 21, Japan’s Asahi Shimbun reported that nine Unhasu Orchestra members were executed for filming themselves having sex and selling the films as pornography.

“There were inappropriate sexual goings on among the Unhasu Orchestra members, and the North Korean authorities launched a probe into the scandal,” a South Korean government official familiar with North Korean affairs said. “During their investigation, they found Ri was also involved in the case, and they executed all of the people involved in the scandal in order to quell any suspicions about her.”

When the Unhasu members were questioned by officials, they reportedly said, “Ri Sol-ju also loved to play like us.”

“Even if it’s just a rumor, Ri’s involvement would be a serious matter to the regime,” the official said. “If Ri does not appear at public events for a long time, we will have to conclude that the situation is serious.”

The Daily NK, a Korean-language online media specializing in North Korean issues, reported Sept. 25 that the North Korean regime is cracking down on high-ranking officials to find out who spread the rumors about Ri, citing sources in Pyongyang.

“Many high-ranking officials are being called for questioning,” a source told Daily NK. “I recently heard that ‘the reputation of the Madam [Ri] could be seriously hurt.’?”

Kim Cheol-woong, a North Korean defector who was a pianist in North Korea’s National Symphony Orchestra, said that he was friends with the head of Unhasu Orchestra, Mun Kyong-jin, who was also reportedly executed.

“Mun entered the Pyongyang University of Music and Dance eight years prior to me,” Kim said.

“His father was a high-ranking official, a director at the Ministry of Culture. North Korea must have executed him as part of a reign of terror [to squelch rumors about Ri].”

An Chan-il, a defector-turned-analyst at the World Institute for North Korean Studies, said Kim Jong-un appears to be facing an unexpected hurdle to stabilizing his leadership due to the scandal.

“When it came to Kim Jong-il, he thoroughly eradicated all traces of the past life of his wife Ko Yong-hui, who was a member of the Mansudae Art Troupe,” An said. “But in the case of Ri Sol-ju, I think Kim has not finished that task yet.”

Analysts pointed out that the fact that Ri was publicized in state media accelerated the spread of the rumors. Former leader Kim Jong-il never allowed his wives to be seen in public.