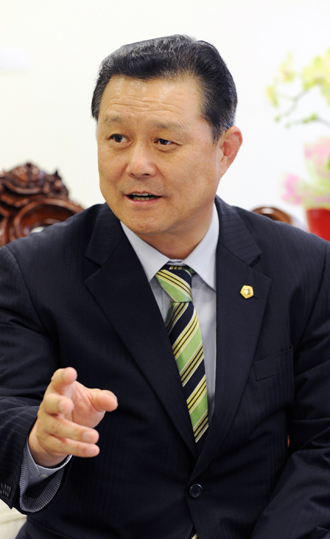 The chairman of the Seoul Metropolitan Council was arrested without a warrant on Monday for allegedly receiving a 100 million won ($92,900) kickback from the president of a local construction company.

The Suwon District Prosecutors’ Office is looking into whether Council Chairman Kim Myung-soo of the Democratic Party offered any unlawful preferential treatment in the bidding or demolishing process of a project in southern Seoul.

A subsidiary of Dawon Group was commissioned by the city to pull down a relatively old apartment complex called Shin-Banpo Apartment Complex 1 in Banpo-dong, southern Seoul, under an ongoing reconstruction plan.

The alleged kickback was discovered as the prosecution is investigating Lee Geum-yeol, the head of Dawon Group, on suspicions of tampering with company accounts and misappropriating more than 105 billion won since 2006.

The Suwon district office indicted and detained the 43-year-old Lee in August. While investigating the use of the misappropriated funds, the prosecution found that part of the money was spent lobbying influential government officials.

Also charged with receiving a kickback from Lee is a former council member of the Incheon Metropolitan Council surnamed Kang.

Prosecutors raided the office and residence of Chairman Kim on late Monday, collecting documents and e-mails. They also requested the Seoul city government give them a full list of committee members who voted for the renovation in the affluent neighborhood in January.

The Democratic Party expressed regret about the arrest yesterday as the arrest of an incumbent city council chairman without a warrant is extremely rare.

“The prosecutors never officially asked the chairman to be questioned, and there is little possibility for the incumbent chairman to leave the country to avoid investigation,” the opposition party said in a statement. “But they arrested him without warrant on the first day of an annual regular session. That’s extremely regrettable.”

A council meeting to discuss the funding of day care programs was held in the absence of the chairman on Monday.

The city said construction will go on as planned.