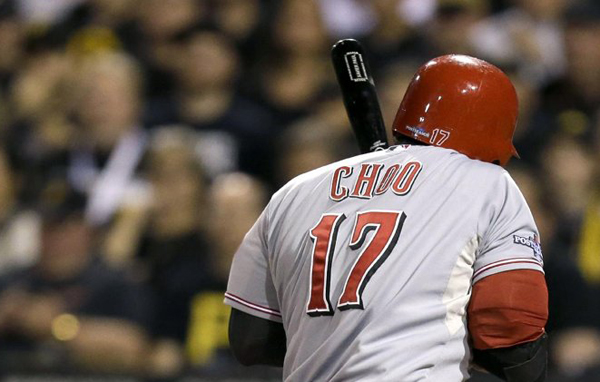 Choo Shin-soo of the Cincinnati Reds is hit by a pitch from Pittsburgh Pirates’ pitcher Francisco Liriano in the fourth inning of the NL wild-card game Tuesday in Pittsburgh. Choo homered in the eighth inning. [AP/NEWSIS]

PITTSBURGH - Choo Shin-soo of the Cincinnati Reds homered in his MLB postseason debut but couldn’t advance to the National League Division Series as the Reds lost to the Pittsburgh Pirates, 6-2, in the wild-card game Tuesday night.

Russell Martin homered twice and Francisco Liriano was dominant for seven innings for the Pirates, who went 21 years between playoff games.

In front of a black-clad crowd savoring its first postseason game since 1992, Marlon Byrd also connected and Andrew McCutchen had two hits and reached base four times for Pittsburgh.

Liriano, who has been very strong at home games in the regular season, with eight wins and one loss in 11 games and a 1.47 ERA, dominated the first three innings. 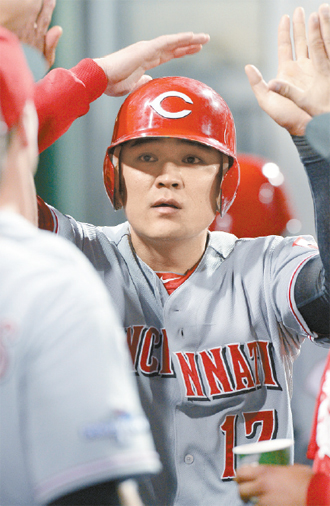 Choo is greeted by teammates in the dugout after scoring in the fourth inning. [AP/NEWSIS]

In the fourth inning, Liriano hit Choo with a pitch. Ryan Ludwick singled, sending Choo to second base, then Jay Bruce drove him home with a single. Choo, the first Korean position player to appear in a postseason game, homered in the eighth, a drive to right field that was upheld by video review.

Signed on the cheap in the offseason after a mediocre 2012 split between the Minnesota Twins and the Chicago White Sox, Liriano has been reborn in Pittsburgh. He went 16-8 with a 3.02 ERA during the regular season, his devastating slider nearly unhittable against left-handers.

Cincinnati starter Johnny Cueto struggled in his third start since coming off the disabled list last month. Cueto gave up four runs in three and one-third innings and appeared rattled by a raucous ballpark that taunted him throughout by chanting his name.

Byrd, acquired by the Pirates in late August from the New York Mets, celebrated the first postseason at-bat of his 12-year career - 1,250 games - by sending Cueto’s fastball into the seats to give the Pirates the lead. The shot sent another jolt through an already electric crowd, which began singing “Cue-to, Cue-to” in unison when Martin stepped in.

Martin sent a drive into the bleachers in left field. The Reds never recovered, ending a 90-win season with a six-game losing streak. Three of those losses came against Pittsburgh in Cincinnati in the final series of the season that determined the site of the win-or-die game.

Reds manager Dusty Baker backed Cueto before the game, saying his ace “thrives on this environment.” Maybe, but the right-hander never looked comfortable at a place where he has been nearly unhittable.

Meanwhile, Los Angeles Dodgers’ pitching coach Rick Honeycutt confirmed that left-hander Ryu Hyun-jin will be the starting pitcher for Dodgers versus the Atlanta Braves in game three of the National League Division Series that will be held in Dodger Stadium on Sunday. Ryu pitched twice against the Braves this season without earning a win or loss, with a 2.13 ERA. Ryu went 7-4 with 2.23 ERA in 14 home games and 7-4 with a 3.69 ERA in 14 away games.