Single exhibition has many meanings

Single exhibition has many meanings 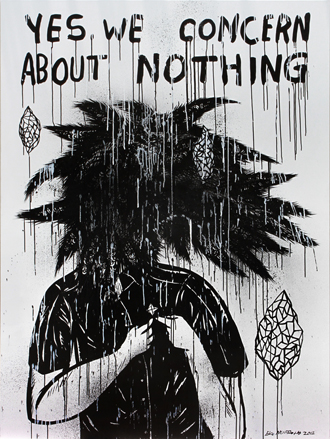 “Yes, We Concern About Nothing” is part of Indonesian artist Eko Nugroho’s first solo show in Korea. Provided by Arario Gallery

With the words “Salty Tolerant” printed on his T-shirt, promising Indonesian artist Eko Nugroho stood in front of Arario Gallery in Cheongdam-dong, southern Seoul, with a warm, welcoming smile. The words on his shirt are a concise version of what the artist wants to convey to the general public.

The whole gallery is a single “total installation” rather than a collection of works, and it is designed to be perceived as one of Nugroho’s big drawing papers.

Nugroho, 36, is a rising artist who was asked to help design a new scarf for Louis Vuitton’s “Foulards D’Artistes 2013” collection earlier this year. He is also listed in Art & Auction magazine’s “Top 50 under 50.”

His works engender the street art that reflected social and political problems after the falling of the dictatorial Suharto regime at the end of the 1990s. Democracy had just begun in Indonesia when he started his career as an artist.

With an atmosphere that generates free expression, he has been bold enough to try various genres and materials.

Along with public murals, paintings and drawings, he explored the possibilities of other media such as embroidery, artist books, comics, video animation and contemporary wayang kulit (Indonesian traditional shadow puppets.)

His works reflect the voice of Indonesian society, in which the uniformity of the majority is emphasized over the individuality of the minority.

Nugroho also questions the contradictory nature of mankind by drawing masks to show people’s need to hide themselves in order to adapt to society.

“Everyone lives in a mask without expressing their own individuality and identity due to the majority,” said Nugroho, pointing at the painting “Yes, We Concern About Nothing.” 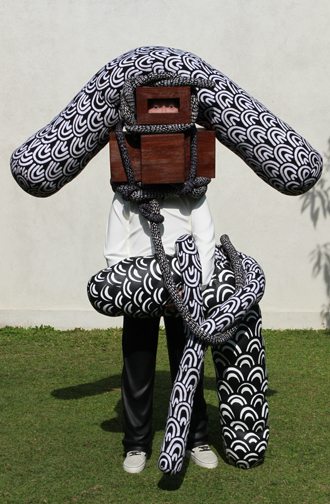 “Let Me Thinking Of You”(2012) by Eko Nugroho. Provided by Arario Gallery

Most of Nugroho’s works have dual messages: a call for individuality and identity and for people to abandon what is not real. He also talks about the ideals that young generations are under. In his installation work, “Let Me Thinking of You,” a mannequin holds a pillow in its hands.

“The pillow is something one wants. It can be anything like money and fame. But those are never real,” said Nugroho.

The same goes for the other two impromptu installations. With their feet sticking out, two people are trapped inside boxes on which “I Love You” and “I Love Future” are written. The plastic flowers on the boxes signify ideals that aren’t real.

“People say ‘I love you’ all the time, but there are still wars and poverty going on. So I thought it would be better to say ‘I love future’ instead of ‘I love you,’ for a better world,” he said.

Nugroho’s insights might seem too heavy for young generations. Yet he never loses his humor and includes cartoons and characters with a modern pop flavor.

“I wanted to be a comedian when I was young,” Nugroho said. “Humor is the element of inspiration for me.”

Nugroho’s work is consistently drawing praise. “Freedom is expressed in diverse dimensions with unique elements of each country in Southeast Asia,” said Ryu Jung-hwa, associate director of Arario Gallery. “But Eko, with humorous characters and cartoons that convey interesting messages to the general public rather than putting it to them straightforwardly, is the most promising artist among Southeast Asian artists.”

Even with a humorous and modern pop flavor, he never misses out on using tradition and originality in his works. As part of the Wayang Bocor puppet troop, he includes contemporary wayang kulit in his works. He would like to bring back the culture of wayang kulit that is lagging behind in younger generations and deliver his insights with an emphasis on tradition.

“My generation is happening today. Yet love, solidarity, tolerance and peace are key words for everyone. In the way of living together, technology can’t contain the real you.

“Young generations need to be aware of those things. Being global is good. But doing it locally is also good. So I do it my own way, through art,” Nugroho said.