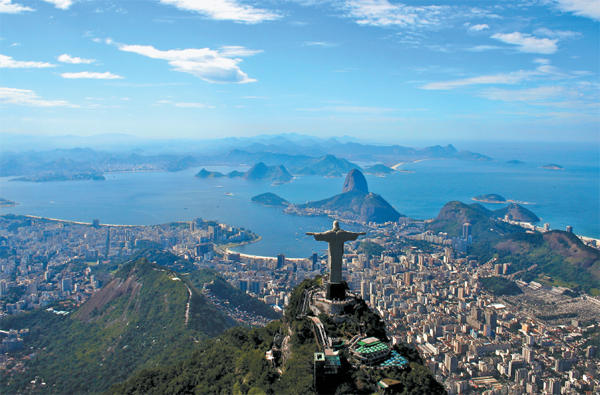 An aerial view of the Christ the Redeemer statue in Rio de Janeiro. The Brazilian city wants to become the next Hollywood by attracting filmmakers and producers by providing them handsome subsidies.

RIO DE JANEIRO -- For Mayor Eduardo Paes, it’s not enough that Rio de Janeiro is both an Olympic and a World Cup host city. He wants Hollywood and is determined to turn Rio into a Woody Allen city, too.

Paes has gone to extraordinary lengths to persuade the director to shoot a movie here, meeting with Allen’s sister, dispatching him handwritten notes and even pledging to underwrite 100 percent of production costs.

Allen hasn’t taken Paes up on his offer, but the mayor continues to lobby hard. Scoring a film by the legendary director would help cement Paes’ vision for the city: to turn Rio into a cinema hub, the Los Angeles of South America.

While Hollywood needn’t watch its back just yet, there’s no doubt that Brazil’s film industry is booming.

The country is on track to make 100 feature films this year, up from 30 in 2003, and it’s increasingly sought out by foreign productions cashing in on the government’s generous subsidies and incentives. New studio complexes are in the works, and cinemas are mushrooming across Brazil to keep pace with ever-growing numbers of movie-goers, many of them new members of the middle class who were pulled out of poverty by a decade of booming economic growth.

“The big shift is that now many more people have disposable income,” said Adrien Muselet, chief operating officer of RioFilme, the city government’s film finance company. “Once you’ve covered your basic necessities, bought your fridge and your washing machine, what do you want next? Fun. And for many people, that means the movies.”

The new viewers have helped push Brazil’s box office gross from $327 million in 2008 to $737 million last year, according to the trade publication Filme B. That puts Brazil among the top 10 movie consuming countries in the world, said Muselet, and the industry is taking note.

With its population of 204 million, this South American giant is increasingly factoring into the major United States studios’ strategic calculations.

“When you take an American blockbuster and you set it here in Brazil, even for just a couple of scenes, it just explodes in the box office here,” said Muselet, pointing to “Breaking Dawn,” part of the “Twilight” series of teen vampire movies, which was filmed partially on location in Rio and the coastal colonial city of Paraty. Brazilians flocked to the movie, and the country ended up being the film’s second biggest market.

Other big Hollywood productions such as “Fast Five” of the “Fast and Furious” franchise and the Sylvester Stallone vehicle “The Expendables” were also partially shot here in recent years.

Rio officials also hope movies made here will help burnish the image of a city mostly notorious for its grinding poverty and drug-fueled violence, particularly as Rio gears up to host next year’s soccer World Cup and the 2016 Olympics.

In a bid to attract more foreign productions, Rio’s state government created an agency to walk teams through Brazil’s Byzantine bureaucracy, helping them get the dizzying number of permits and permissions needed to shoot.

Producer Aaron Berger, an American who works in both Rio and Los Angeles, said the subsidies helped get thing rolling for his series “Gaby Estrela,” which is about to premier on Globo TV’s kids cable channel Gloob. “It was a tremendous boost for us,” he said.

Over the past decade, the federal government has spent more than $450 million on films, and many state and city governments also invest in movies made locally, provided they meet requirements that typically include hiring at least a certain number of local employees. And since Brazilian law allows corporate tax write-offs for cultural projects, companies such as petroleum giant Petrobras and cellphone provider Claro often underwrite movies.

The industry also got a boost from a 2011 law requiring all cable television channels to show at least 3 1/2 hours of independently produced local content each week during prime time.