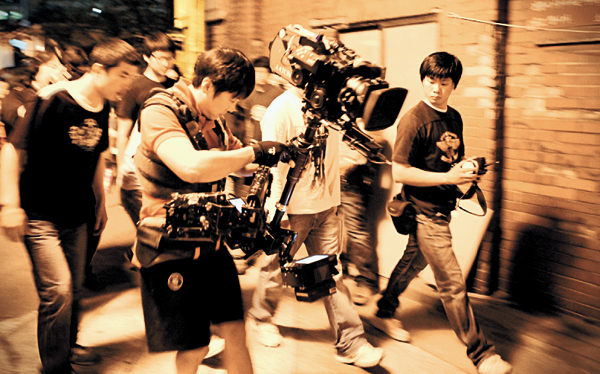 With the introduction of a standard labor contract, which specifies working hours and fringe benefits, the working conditions of film crews have improved in recent months. Provided by Federation of Korean Movie Workers’ Union

Unlike the beautiful visual imagery they make, the life of a film crew is not glamorous at all. They usually work up to 75 hours per week, 35 hours more than regular working hours that are stated in the labor law, and they aren’t guaranteed holidays or insurance.

Given that the average annual income of college graduates who land a job at a small or medium-size company is 22.5 million won, it is not easy to make ends meet by working on a film crew.

According to a survey by the Federation of Korean Movie Workers’ Union last year, 66 percent of film crews earn less than 10 million won per year, which is equivalent to the minimum wage of 957,220 won. In the survey, nearly 40 percent of them said they wished to change their jobs. The survey was conducted among 590 film staff.

But a new wave of change is added to the nation’s film industry, which attracted a record-high 98.5 million moviegoers in the first half of this year.

The change was initiated by an April agreement in which film crews, major distributors and film production companies reached an agreement to adopt a standard labor contract as a way to improve the film crews’ working conditions.

The standard labor contract is used by almost all workplaces except for a few, such as the film industry, and the contract specifies working hours, fringe benefits and holidays. The contract is made between individual film crews and production companies.

Most contracts in the film industry, however, are starkly different from standard labor contracts. The head of each team, from lighting to sound, receives a lump sum of money from the production company and hands it out to his or her team members. The duration of the contract is not specified and four major types of insurance are not included. If a production is extended, crews cannot ask for more wages and there is no extra pay for overtime.

Five months have passed since the introduction of the standard labor contract, and changes are found intermittently in Chungmuro, the Korean equivalent of Hollywood.

Under the new contract, the newest crews of “The Law of Pleasures,” which is in the filming stage, receive about 2 million won per month on average. Four major types of insurance are covered by the production company.

Crews that used to stand by on set for 20 hours a day now work eight hours a day. They also take a day off during production and are paid for overtime, too. 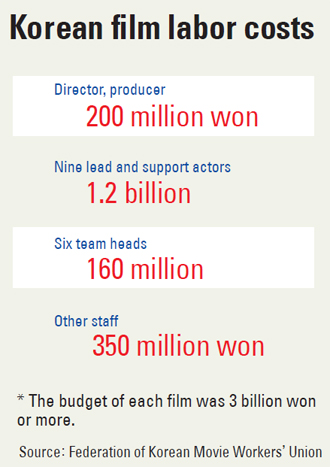 Considering the prevalent poor working conditions of film crews, these are dramatic changes, with more production companies taking the initiative to adopt the standard labor contract.

“Now, many of us think time is money on the set,” said Kwon Chil-in, director of “The Law of Pleasures.” “We try to be punctual according to the shooting schedule. We pay them properly, and it means we can hire more skillful staff and ask them to be more professional.”

Film investors, which have taken a lukewarm attitude in improving rights of film crews, have started changing their tone.

“We’ve realized we have our own role in improving working conditions of film staff,” said an official from the entertainment giant. “It is time for investors to take the lead.”

Of the many films that are made under the investment of CJ E&M, seven films, including “Suspicious Woman” and “Point Blank,” which will hit the theaters in the near future, all adopted the standard labor contract.

Film industry experts think highly of such changes, saying the film market has grown a lot in recent years in terms of scale, but working conditions of people inside the industry didn’t keep pace with that growth.

“Korean cinema has achieved scale and diversity, but the issue of rich-get-richer, poor-get-poorer has been getting worse,” said film critic Jeon Chan-il.

The Federation of Korean Movie Workers’ Union analyzed seven Korean films released last year. The films cost 3 billion won or more to produce, and they all reached the break-even point. And the union found out average labor cost accounted for 43.5 percent of the budget.

Looking at labor cost, the performance fees of nine leads and supporting actors take up the largest share, with 25.4 percent and the average wage of the top eight film crew members is greater than that of the other 48 members.

“We need to come up with countermeasures to prevent a few people from taking the lion’s share,” said Choi Jin-wook, head of the union.

Some experts say more action plans are needed to bring fundamental changes to the film industry.

Kim Young-min, the head of JK Production, which is working on a film entitled “Gukje Market,” said more detailed contracts are needed.

“But the standard labor contract is only focused on the production stage. It means we need more detailed contracts,” added Kim.

Changing the perception of film crews is another issue to be solved. Under the new contract, film crews are paid on an hourly basis. It is good for some, but not for some others when they work less.

The film industry, however, seems determined to change the notorious working environment on its own.

“There should be legal and institutional devices to oust production companies which mistreat film crews,” said Lee Eun, head of the Korean Film Production Association.

The Korean Film Council also made it clear that films that are produced under its 15 billion won fund should adopt the standard labor contract.