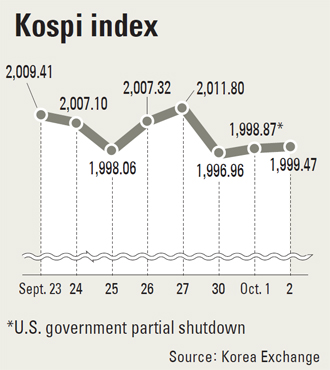 Despite external jitters, the Korean stock market remained steady yesterday on the second trading day after the U.S. government partially shut down for the first time in nearly two decades because House Republicans, who were determined to bring down the health care law known as Obamacare, refused to budge a funding bill on Tuesday.

The benchmark Kospi gained 0.03 percent to close at 1,999.47 yesterday, continuing its rally from the previous day when shares rose 0.1 percent. Counteracting concerns that have been raised over a possible effect of a partial shutdown in the United States on the Korean stock market, it was business as usual at the local bourse.

“Despite internal and external risk elements, the local financial market reflected by indexes, including stocks, currency, and yield, is continuing to remain in a favorable state,” said an official from the Financial Services Commission yesterday. “Externally, from Oct. 1 the U.S. government went into its first partial shutdown in 17 years, but the possibility of it being long-term isn’t high.”

The official noted that internally there are concerns that the country’s bond market could contract following Tongyang Group’s filing for court receivership for five of its core affiliates this week.

The Korea Center for International Finance also released a daily report on major stock markets. “Both U.S. and European stocks gained [on Tuesday] based on an outlook that the U.S. government shutdown will not continue for the long-term,” the report stated. “Also, figures showed manufacturing business in the U.S. improved.”

On Tuesday, U.S. treasuries also fell for the first time in three days on speculation that a shutdown of the U.S. government may end soon enough for lawmakers to work on extending the federal debt limit.

The Institute for Supply Management’s factory index climbed to its highest level since April 2011. The index rose to 56.2 in September, up from 55.7 in August. “The expectation is that it will be short-lived, and therefore the ultimate impact would be modest,” said Larry Dyer, a strategist at HSBC Holdings in New York.

Bruce Bittles, chief investment strategist at RW Baird & Company, also said, “We have gone through this before, so it’s not too surprising that investors aren’t frightened by it.”

“The selling pressure lifted, and that has encouraged a lot of buyers here who are looking into buying the dip.”

The standoff in fact may be an opportunity for investors to buy stocks based on past experience.

The S&P 500 has risen 11 percent on average in the 12 months following past government shutdowns, according to data compiled on instances since 1976.

“Investors seemed to have factored in the U.S. government’s shutdown and consider it a political battle rather than an immediate catastrophic event for the global economy,” said Attila Vajda, an analyst at ACB Securities.

Meanwhile, the shutdown may help to delay a reduction in the Fed’s purchasing of bonds, according to Citigroup. American policy makers said last month they want more evidence of a sustainable economic recovery before tapering their $85 billion-a-month program.

“The Fed has told us they’re on hold for quite some time, and we now are not going to get any economic readings that are accurate for probably a couple of months accurate at least,” said Michael Plavnik, head of the short-term interest-rate trading desk at Citigroup. “The Fed’s not really going to have a chance to taper really until the first quarter of next year.”