Ozil impressive as Arsenal coasts to victory over Napoli in CL

Ozil impressive as Arsenal coasts to victory over Napoli in CL 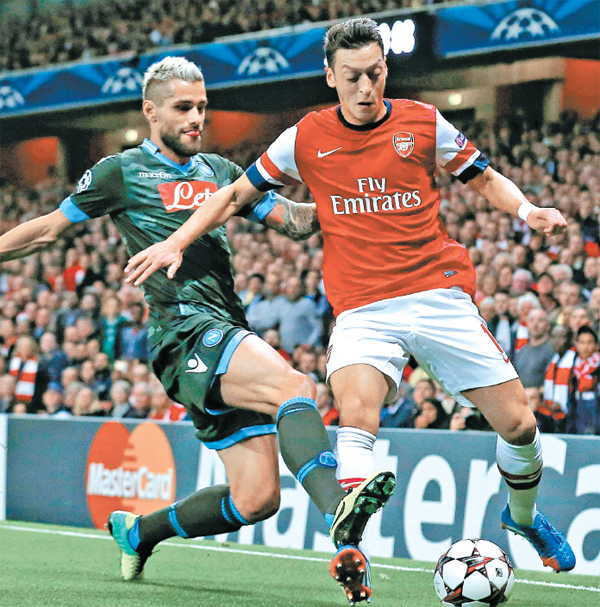 LONDON - Luring Mesut Ozil away from Real Madrid is shaping up as one of Arsene Wenger’s canniest moves at Arsenal.

Just a month into his Arsenal career, Ozil’s impact has been impressive, living up to the club-record transfer fee of €50 million ($66 million).

His first goal in an Arsenal shirt came on Tuesday, a stylish finish before setting up Olivier Giroud inside 15 minutes as the London club coasted to a 2-0 victory over Napoli in Champions League.

“It is one of the best halves we have played for a long time,” Wenger said.

“We have belief, we have a good spirit,” the Frenchman added as he marked 17 years at the helm, apparently more hopeful than ever of a first trophy since the 2005 FA Cup.

Arsenal is atop the Premier League, and now three points clear of both Napoli and last season’s Champions League runners-up Borussia Dortmund at the top of one of Group F in the European competition. Dortmund beat Marseille, 3-0, in the other group game.

The home fans at Emirates Stadium were celebrating after just eight minutes when Ozil put Arsenal in front against Serie A’s second-place club.

Giroud brought the ball down with his chest on the right touchline and flicked it onto Aaron Ramsey, who delivered the cross that Ozil sidefooted into the net.

“His skill, his finishing, it is everything that you dream to see when you sit in the stands watching football,” Wenger said. “It’s always on your mind a little bit [scoring your first goal] so he got rid of it.”

The German playmaker then turned provider to set up Giroud in the 15th minute.

Napoli conceded possession from its own throw-in and Ozil seized on the ball, cutting in before squaring for Giroud to sweep past goalkeeper Pepe Reina.

The cushion was enough, and although Arsenal couldn’t find a way past Reina again, the second successive group stage win was never in doubt from that point.

“The first half was outstanding,” Wenger said. “The second half we played more with maturity but less drive going forward, more cautious ... the team had that dilemma, they played not to make a mistake.”

Defensively solid while still dangerous at times up front after the break, Arsenal swept to an impressive 10th win in a row in all competitions since losing the Premier League opener to Aston Villa.

“We got so much stick at the start of the season that I’m a bit cautious,” Wenger said. “(Ozil) gave a great lift around the club and belief.”

This wasn’t the return to London that Napoli coach Rafa Benitez desired, having been jeered by his own Chelsea fans last season during an unpopular interim stint at the club.

The Spaniard rued the lack of concentration by his Napoli lineup that led to Arsenal scoring the quick-fire goals.

Napoli, which saw its perfect start in Serie A end last week, was without injured striker Gonzalo Higuain.

The closest Napoli came was from distance, with Jose Callejon bending a free kick over and Lorenzo Insigne firing over in a second half when the visitors rarely troubled Arsenal.

Even with the luxury of deploying midfielder Jack Wilshere from the bench, Arsenal has its share of injury issues. AP