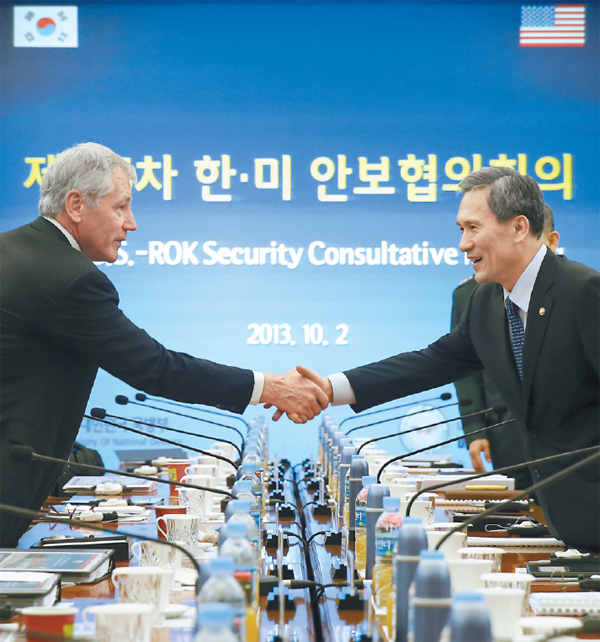 The much-anticipated meeting between defense leaders of the two countries to discuss delaying the transfer of wartime operational control of South Korean troops from the U.S. to Korea made little progress yesterday. The transfer is scheduled for December 2015.

At the 45th U.S.-ROK Security Consultative Meeting in Seoul, South Korean Defense Minister Kim Kwan-jin and U.S. Secretary of Defense Chuck Hagel only agreed to form a joint working group by the end of this month to discuss and assess conditions for the transition, with a goal of finalizing the transfer plan within the first six months of next year.

“We believe in a comprehensive review of the overall security situation on the Korean Peninsula, and Korea’s capacity to cope with it is necessary,” said Kim in a press conference. “The most appropriate timing for South Korea to assume wartime control will be agreed upon after discussions between Seoul and Washington.”

“How ready the South Korean Army is to cope with nuclear and missile attacks from the North will constitute a key part of the review,” said a Ministry of Defense official who asked not to be named. “The transfer of wartime control will be possible only when we are seen to be substantially prepared.”

The working group is also expected to assess how far North Korea has gone in shrinking its nuclear weapons.

The two defense chiefs failed to reach a decision on the transfer in a bilateral meeting in Brunei in late August, although Kim conveyed the South Korean government’s wish to delay the transfer. He cited new security challenges posed by North Korea, including its third nuclear test in February.

Since the end of the 1950-53 Korean War, Washington has maintained military authority over South Korea in case another war breaks out with the North. The United States has recently taken a lukewarm position to prolonging its support and protection given its significant cuts to its military spending and tightened budget.

Originally, the U.S. was to transfer wartime operational control in 2012, but the Lee Myung-bak administration asked for the transfer to be delayed until 2015.

One notable development in the meeting was that the two leaders signed an agreement to mobilize a three-step “tailored deterrence strategy” to deal with North Korea’s weapons of mass destruction (WMD) threats, including nuclear weapons and missiles.

The strategy, which the allies have been working on for the past two years, will classify the nuclear crisis situation caused by the North into three stages and react appropriately. If a nuclear attack is imminent, South Korea will take pre-emptive action. The two will test the strategy with various scenarios in an upcoming military exercise. The enhanced deterrence strategy is a mutual acknowledgement that the North has substantially boosted its military threat. 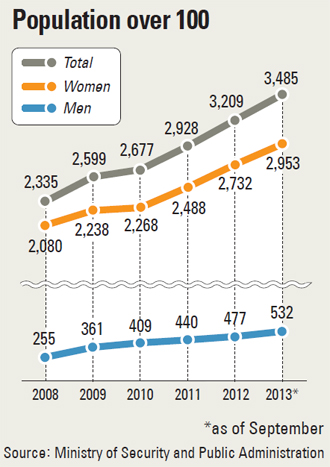 The Seoul-Washington agreement also jibes with President Park Geun-hye’s address on Tuesday at the 65th Korea’s Armed Forces Day celebration that South Korea will build a more proactive national defense system as a deterrence to the North’s WMD.

“South Korea is the first country in the world the U.S. has agreed to take such a strategy with,” said an official at the Defense Ministry on condition of anonymity.

When questioned by reporters if he asked South Korea to join America’s own missile defense (MD) system - ballistic missile interception programs deployed by the U.S. and Japan against the North’s nuclear threats - Hagel only said the MD programs of the two countries do not necessarily need to be identical.

Earlier this week, he told U.S. reporters traveling with him that MD is a major capability the Korean forces should be equipped with before wartime operation control is transferred from the U.S.