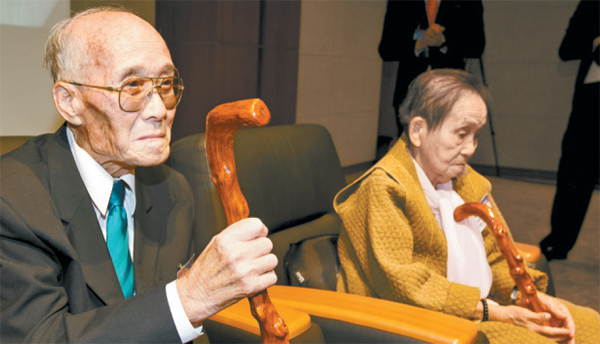 In celebration of the Older Persons Day yesterday, the Ministry of Health and Welfare held an event to honor the elderly at Baek Bum Memorial Center in central Seoul.

The ministry invited 350 people including 157 recipients of awards for working with the elderly.

Among the attendees were centenarians Chae Soon-im and Han Kyung-hak, who took part on behalf of the 1,264 Koreans turning 100 this year, or 99 in the Western counting system.

The Health Ministry has given the canes to anyone turning 100 since 1993 and this year saw a record number.

The ministry noted that the population of Koreans over the age of 100 is rapidly on the rise.

“The thing that people living long lives have in common is a positive attitude,” said Lim Eul-gi, head of the seniors policy division at the ministry.

“And they have a willingness to live as long as possible. Another common point is that many try to be engaged in community volunteer services.”

Statistics Korea carried out a survey of 1,592 centenarians in 2011 to look into the possible causes of longevity.

In the survey, 54.4 percent of the respondents attributed their health to a balanced diet, followed by a positive mindset (31 percent) and regular life style (30.9 percent).

Their favorite food was vegetables, selected by 67.5 percent of respondents.

Many claimed to shun flour-based foods.

“If you look at people over 100, they keep themselves away from cigarettes and alcohol and like walking around,” said Kwak Chung-shil, a food and nutrition professor at Seoul National University.

“They are conscious about what they eat and tend to eat more nutritious food and take a wide range of nutrients, and most importantly, they don’t eat too much.”