FC Seoul in ACL finals after draw against Iran

FC Seoul in ACL finals after draw against Iran 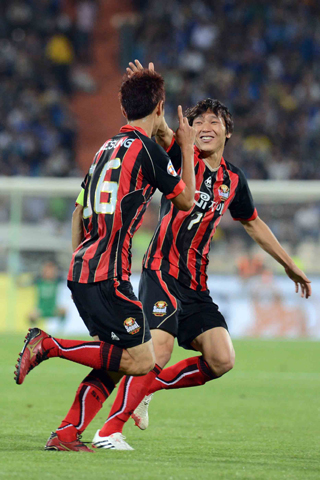 FC Seoul midfielder Ha Dae-sung celebrates with teammate Kim Chi-woo after scoring against Esteghlal in the 37th minute of the second game of the semifinals of the Asian Champions League in Iran on Wednesday. [NEWSIS]


FC Seoul advanced to the finals of the Asian Champions League for the first time in the club’s history.

In the second leg of the semifinal game against Iran’s Esteghlal held in Teheran at local time Wednesday, FC Seoul played to a 2-2 draw, finishing off a 4-2 aggregate victory, thanks to the 2-0 victory it earned at the Seoul World Cup Stadium last week.

FC Seoul is the fifth straight club from the K-League Classic to advance to the finals of the AFC Champions League, after the Pohang Steelers (2009), Seongnam Ilhwa Chunma (2010), Ulsan Hyundai Tigers (2011) and Jeonbuk Hyundai Motors last year.

In the finals, FC Seoul will battle Guangzhou Evergrande of China, which crushed Kashiwa Reysol of Japan, 4-0, in their semifinals on the aggregate score of 8-1 on Wednesday.

The finals will also have two legs, and the first game will be held on Oct. 26 at the Seoul World Cup Stadium.

The key to the match was how Seoul would take possession in the midfield areas - and the key player was midfielder Ha Dae-sung.

Under the leadership of the FC Seoul captain, Seoul’s midfielders aggressively pressured Esteghlal, which didn’t have its two best midfielders - Javad Nekounam and Andranik Teymourian - due to accumulated yellow cards.

Ha scored the team’s first goal in the 37th minute with a delicate chip shot with his left foot over Esteghlal goalkeeper Mehdi Rahmati.

In a pregame interview, Ha said that scoring first is very important when facing Iran. He played against Iran in the 2014 Brazil World Cup Asia qualification round and silenced 90,000 of Iran’s fans when he scored.

With a two-goal deficit, Esteghlal soon was an aggressor in the second half. They scored their first goal of the two-leg matches by a corner in the 50th minute on a header.

In the 75th minute, Esteghlal’s Ghazi pounced on his own rebound off the right post to make the score 2-1, but midfielder Kim Jin-kyu killed Esteghlal’s hopes with a penalty, which was earned by Cha Du-ri from Hanif Omranzadeh.

“I want to thank my all players for doing a super job in a tough game like this,” Choi Yong-soo, head coach of FC Seoul said after the game.

“We were soon surrounded by tens of thousands of fans hoping for their home team’s victory, but I think our players played smart and calm. They showed what they are capable of in this game.”

Regarding the match against Guangzhou, Choi said, “Some evaluate the Guangzhou team as the best club in Asia, but I think we can give a very nice surprise that such an evaluation is wrong.

“We will prepare for the match well as we still have much time. Our defense has been stable in previous matches and our midfielders were speedy and good at ball possession. If we can play the same way we have done in previous matches, there will be no problems in achieving the Champions League trophy.”