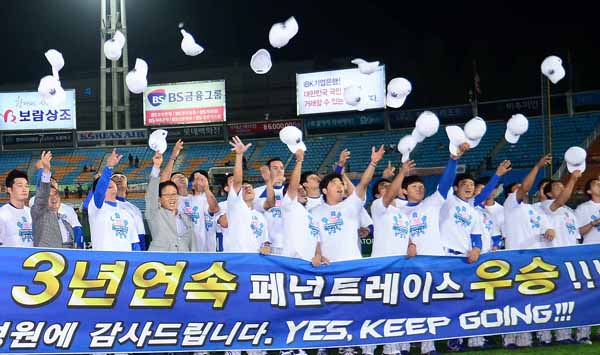 The Samsung Lions celebrate after clinching the Korea Baseball Organization’s regular season by beating the Lotte Giants on Wednesday in Busan. [NEWSIS]


The defending champion Samsung Lions clinched the regular season of the Korea Baseball Organization (KBO) for the third straight year and will go to the Korean Series.

The Lions are the first team in KBO history to win three straight seasons. Samsung has won seven of the past 14 regular seasons, becoming one of the league’s strongest teams since 2000.

By beating the Lotte Giants, 9-2, on Wednesday, the Lions clinched one of the two Korean Series spots, thanks to first baseman Chae Tae-in, who had four hits, and veteran lefty starting pitcher Jang Won-sam, who allowed only two runs in five innings.

“It was a tough season for us because many of our starting players suffered from small and big injuries all season long,” Lions manager Ryu Joong-il said.

“Because we didn’t win many games between Aug. 20 and Sept. 10, we had a hard time securing the top spot of the league,” Ryu said.

Before the season started, analysts predicted that the Lions would win the regular season as they kept most of their strong pitchers and hitters, including slugger Lee Seung-yeop and Choi Hyung-woo, who were in good shape in the preseason. But a series of injuries knocked out many of the players.

In the opening game of the season, third baseman Park Seok-min was the only player in the projected lineup who was able to start. Shortstop Kim Sang-soo, second baseman Cho Dong-chan, first baseman Lee Seung-yeop, and catcher Jin Gap-yong were all injured.

In August, Chae went on the disabled list for a month due to a left shoulder injury, and leadoff hitter Bae Yeong-seob missed 10 games after he was hit in the head by a pitch in September.

In early September, the Twins took over the Lions’ top spot and the Lions fell two-and-a-half games behind the Twins on Sept. 14, with only 15 games left.

But the Lions bounced back. Jung Hyung-shik took over Bae’s leadoff spot in center field and hit .365 with 15 RBI, scoring14 runs in 13 games while Bae was injured.

Kim Tae-wan, acquired from the LG Twins in an offseason trade, took over for Cho at second base and hit .310 with three home runs and eight RBI in September.

When slugger Lee and Chae, who both play first base, were injured, veteran Kang Bong-kyu, who used to be an outfielder, replaced them.

Young reliever Shim Chang-min replaced veteran Chong Hyun-wook, who signed with the LG Twins as a free agent after the 2012 season.

The Lions were called the “New York Yankees of Korea” in the early 2000s because they spent a lot of money buying big-name players, such as retired slugger Shim Jung-soo and shortstop Park Jin-man, who played for the SK Wyverns this season. But since 2010, many players from their farm system made it into the Lions’ lineup, such as Park, Chae and Choi - and there are many young players aiming to be included on Ryu’s 25-man roster.

“Now we are ready for another big victory,” manager Ryu said. “Since we have about two weeks for the Korea Series, we will focus on maintaining our players’ physical conditions.”