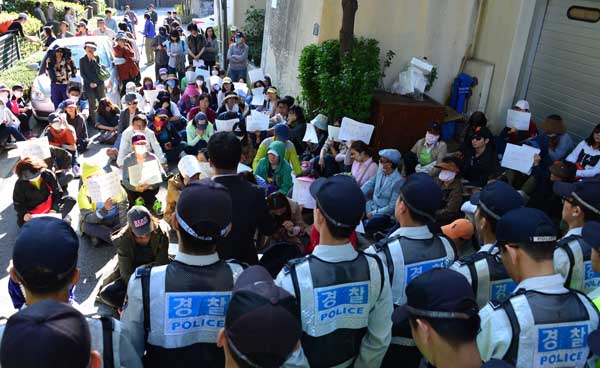 A group of investors in Tongyang Group bonds stages a protest near the residence of Chairman Hyun Jae-hyun yesterday afternoon after allegations arose that the company issued fraudulent commercial paper. [NEWSIS]

In the wake of the sudden financial meltdown of Tongyang Group, one of Korea’s top 40 conglomerates, attention is shifting to the debt levels of other large companies.

Rumors are spreading in the local financial industry that some affiliates of Dongbu Group, Hanjin Group, Hyundai Group and Kolon Group - all within the top 40 - could face the same fate as the Tongyang subsidiaries now under court receivership.

Financial authorities are cautioning against overreaction from investors and creditors-? they don’t want scared creditors making things worse for companies by calling in debts.

But, some market analysts say that the Tongyang crisis may serve as a wake-up call for overdue financial reforms at many conglomerates. 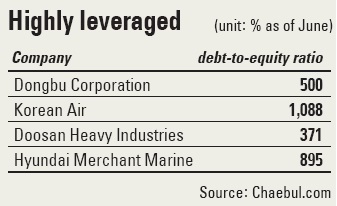 Korea has been praised for getting through the global financial crisis unscathed, but in the eyes of Choi One-lack, a researcher of the Korea Economic Research Institute, there’s an “illusion” shielding many Korean conglomerates.

“As Samsung Electronics and Hyundai Motor have been riding the global markets, some could easily be led to believe that all Korea conglomerates are faring well,” Choi said. “But if you look at the data, most of the other companies are seeing a continuous decline in their profit margins.”

According to a survey of 16 local commercial banks by the Bank of Korea released this week, the banks’ lending attitude toward large-sized companies for the fourth quarter remained at minus 3, the same level as for the third quarter.

The projected lending attitude demonstrates how willing banks are to provide loan. The lower the number, the lower the enthusiasm, and minus 3 is low.

The concern over companies’ financial conditions was a factor, the central bank said, and some large companies are getting more worried attention than others. The Dongbu Group’s construction and engineering arm saw its debt to equity ratio surge to 500 percent as of June. The building contractor had its credit rating slashed from stable to risky early this year. The entire group needs to pay back 519.8 billion won ($483.8 million) worth of debt in the first half of next year.

The 27 largest building contractors in Korea will have to pay around 4.8 trillion won worth of maturing debt on company bonds next year.

The 10 largest have 300 billion won worth of debt maturing on commercial paper next year, and the bankruptcy of one company could trigger a chain reaction if creditors get spooked.

Hyundai Merchant Marine is bearing the brunt of the slumping global shipping industry, and its debt ratio has risen to 895 percent.

Doosan Group is groaning under the financial burden of purchasing the American company Bobcat in 2007.

The debt ratio of Doosan Heavy Industries grew from 200 percent late last year to 371 percent as of June this year.

Tongyang’s crisis followed that of STX Group, whose March bid to sell STX Pan Ocean, the flagship of the group, shed light on its fast deteriorating financial conditions.

An official of Dongbu said that Dongbu Construction will secure sufficient capital to pay back the maturing debt by selling some of its assets.