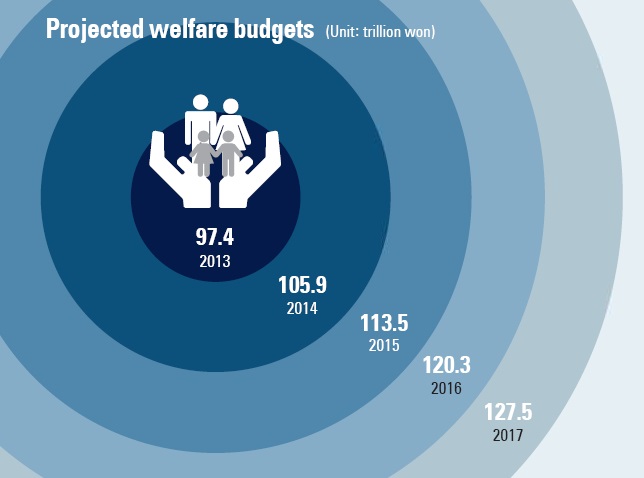 The welfare budget is projected to require as much as 565 trillion won ($525 billion) in total tax revenue over the duration of the Park Geun-hye administration, according to the Ministry of Strategy and Finance’s fiscal management plan released last Sunday.

Spending on welfare, which includes public health and employment-related programs, was 97.4 trillion won this year, but is projected to reach 105.9 trillion next year and climb to 127.5 trillion won in 2017.

That represents an average increase of 7 percent a year compared to projected GDP growth of about 3 percent annually. The discrepancy would likely be the responsibility of taxpayers.

The government finished next year’s budget last week, proposing an increase of 8.7 percent in welfare spending, despite its own national economic growth rate forecast of about 3.9 percent. Actual spending may expand further.

“Starting this year, obligatory spending is expected to rise at an average rate of 6.9 percent annually through 2017. This is almost double that of overall spending during the same period,” said an official at the Finance Ministry.

Obligatory spending refers to fixed expenditures such as financial support to local governments and interest on sovereign bonds issued by the national Treasury. It also includes spending required by welfare laws - such as basic pensions and public pensions - that is growing at a rapid pace.

Such expenditures cannot be trimmed just by changing laws. As demands on the budget increase, the government must raise funds through taxes and the issuance of bonds.

“As the society gets older and more people receive pensions, legally mandated spending on welfare is projected to increase an average of 9.1 percent every year through 2017,” said a budget expert at the Finance Ministry. “The basic pension and public pension will each show sharp growth rates of 27.8 percent and 12 percent, respectively.”

The government’s spending estimate does not take into consideration the situation post-2017, when the working population will plummet due to the country’s low birthrate and the retirement of baby boomers, men and women born between 1955 and 1965, hits full stride.

Five years later, the government could face the prospect of a fatter welfare budget than its current projection due to bigger basic-aging pensions and medical costs associated with the state-designated four major illnesses: cancer, heart disease, cerebrovascular disease and incurable diseases.

Fiscal support to local governments, including financial grants for education and revenue-sharing fees, is also expected to grow an average of 5.7 percent annually as internal tax revenue rises.

However, the government’s plan could turn out to be a fiasco if the overall economy stays sluggish, eventually dragging local governments into a severe financial slump as they split the welfare budget with the central government.

In an effort to prepare for worsening fiscal soundness, the central government is on its way to introducing the so-called pay-go principle, which requires lawmakers to come up with specific measures to obtain revenue sources to fund legislation-required spending.

However, it won’t be easily accepted because so much obligatory spending already has been introduced.

“The pay-go principle won’t be as effective as expected, as lawmakers keep adding budgets that haven’t been discussed previously at the National Assembly Special Committee on Budget and Accounts but pass them anyway,” said an authority from the Finance Ministry.

More taxation is discussed as an alternative answer, but that is not an easy sell, either.

“During a prolonged economic downturn, raising taxes would pour cold water on the overall economy,” said Hyun Oh-seok, deputy prime minister for the economy and finance minister. “Raising taxes should be considered as a last resort after restructuring annual expenditures and maximizing existing tax revenue.”

Raising tax rates doesn’t seem to be a feasible option, as the upheaval over the tax revision bill showed that no one wants to pay more taxes.

“Once a budget is broken, it is almost impossible to revive,” said Kang Bong-kyun, former finance minister and chief board director at Sound Finance Forum.

“It is urgent to focus on revitalizing the national economy by managing the timeline of fulfilling pledges depending on the current financial condition,” he said