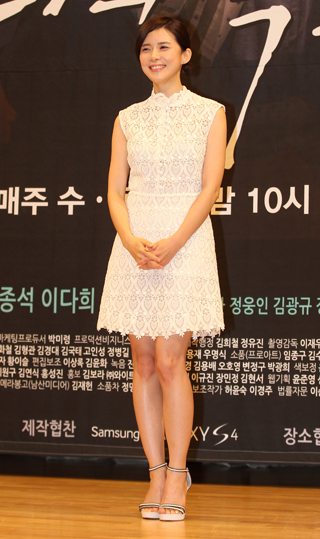 Actress Lee Bo-young was the biggest winner at the 2013 Korea Drama Awards on Wednesday, which took placed in Jinju, South Gyeongsang.

Two of Lee’s dramas came away with awards, SBS’s hit “I Hear Your Voice” and KBS’s “My Daughter Seoyoung,” which recorded the best ratings of any drama this year.

“I was so fortunate to play two characters I really love and did not want to let go of even after the end of the drama. I’m also thankful that audiences recognized the effort I put into acting.”

It was the first time for Lee to make a public appearance since her wedding to actor Ji Sung last week.

“As we become a family, I think we need to show some synergy effect, and I think I have taken a good step by receiving such an award,” she added.

“It’s been only few days since I got married, but I feel more relaxed. So now I’m expecting that I will have a wider choice of roles in the future.” She says she will consider starting another program after the winter.