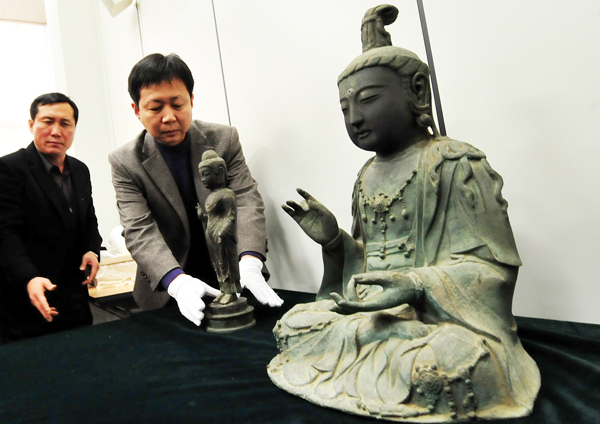 Korean authorities display two Buddhist statues of Korean origin that Korean thieves stole from temples in Japan last October. The thieves were arrested upon their return to Korea; since then, the statues have been in government custody. By Kim Seong-tae

About a year ago, a Korean theft ring snuck into temples in Japan’s Nagasaki Prefecture in the middle of the night, cut holes in the roofs and stole three priceless relics.

The thieves probably thought they would make big money by selling the relics in Korea. But little did they know that they would trigger a huge controversy - in terms of history, law and foreign policy - that has lasted for 10 months with no sign of a breakthrough.

The three stolen cultural properties were a bronze, standing statue of Buddha created in the eighth century, a bronze seated statue of Bodhisattva made in the 14th century, and a copy of the Tripitaka Koreana Buddhist writings created in 1251.

On Oct. 8, 2012, two days after the theft, the thieves brought the two statues through the Busan port in southeastern Korea, alleging that they were replicas that they bought in antique stores. (They told the police later that they threw away the copy of the Tripitaka Koreana.)

And the big problem here is that the two stolen statues are treasures in Japan: The former is designated an important cultural property by the Japanese government, while the latter is designated a tangible cultural property by Nagasaki Prefecture. But at the same time, the two have Korean origins. The standing Buddha is from Korea’s Silla period (57 B.C. to A.D. 935) in the eighth century, while the seated Bodhisattva is from the Goryeo period (918-1392) in the 14th century.

The debate over whether Korea should return one of the statues that the Buseok Temple made and kept for decades in the 14th century reignited last month during a meeting of culture ministers from Korea, Japan and China. [NEWSIS]

So while Japan is demanding that Korea return what is theirs, some Koreans are questioning, “Is it really theirs?” To Japan, it is only natural that they demand the return of the statues. But some Koreans feel uncomfortable about returning what used to be theirs hundreds of years ago. This is because most Koreans speculate that the items were stolen by the Japanese either during its numerous invasion attempts or colonial rule (1910-45), as is the case with tens of thousands of Korean cultural properties kept in Japan.

Not all Koreans feel the same way.

Some say that an earlier theft did not justify burglary to return them. They say Korea should return the artifacts, and once there is enough evidence that the two were indeed stolen by Japan, that Korea should pursue their repatriation through official channels.

While the issue has been dragging on since the thieves were caught by Korean authorities in January, the debate was reignited recently at the trilateral meeting of culture ministers from Korea, Japan and China held in Gwangju on Sept. 28. 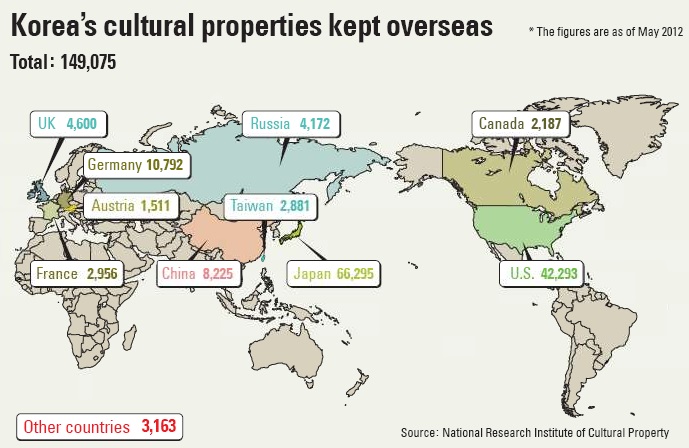 Japanese media such as the Asahi Shimbun reported that ahead of the meeting, Korea’s culture minister, Yoo Jin-ryong, told his counterpart, Hakubun Shimomura, that “While I am obliged to wait for the judiciary’s decision, I believe that they should naturally be returned if rational thought is given to the matter.”

The article began with the sentence, “Two designated cultural properties stolen from Japan and smuggled into South Korea should be returned, South Korea’s culture minister said.”

The report stirred up a hornet’s nest here; critics lambasted the minister, asking how he could have defended the return of a stolen artifact. He had his defenders, though, who argued that an earlier theft did not justify burglary to return them here.

At a press conference after the trilateral meeting, Yoo clarified his remarks, insinuating that there was a misunderstanding.
“International regulations concerning repatriation of cultural properties has a basic principle that stolen or looted cultural properties must be returned,” he said. “I was just reaffirming to the Japanese media that Korea abides by that regulation in a rational and logical sense.”

Some people criticized the Japanese media, as their reports were misleading. They also criticized Shimomura, who brought up the issue that wasn’t even on the official agenda in their meeting, relayed Yoo’s comments to Japanese media and left in the middle of the press conference - which is clearly a diplomatic discourtesy.

As many speculate that the stalemate concerning the statues will likely continue if not worsen, the Korea JoongAng Daily examined the issue from both sides: those that argue that the statues should be returned and those that say otherwise, as well as the issues of Korean cultural properties kept overseas and the progress made to repatriate them.


Among those who say that the statues shouldn’t be returned - at least, not yet - is the Korean Buddhist circle, most specifically Korea’s Buseok Temple in Seosan, South Chungcheong.

This is because academics have found that the 14th-century bronze, seated statue of the Bodhisattva actually has a record that says it was created by the temple in the 1330s and managed by the temple until the 1370s.

The record - kept inside the statue - was unveiled when a Japanese monk came across it while cleaning the statue in May 1951. And the incident is documented in a Japanese publication on Buddhist art in March 1974.

For that very reason, a district court in February approved an injunction request filed by the Korean temple to ban the return of the 14th-century bronze, seated statue of the Bodhisattva until it is established how the statue ended up in Japan - the ruling that led to both of the statues being under the custody of the Korean government until a final decision is made.

A Buddhist community working to repatriate the statue back to the Buseok Temple said in a statement: “[Since the ruling,] we have been making various efforts to find out how Japan’s Kannonji Temple got to possess the statue, including holding an academic conference. We have also found that the statue has been damaged and mislabeled, [and we demand] that be corrected.”

Among the scholars who argue that the return of the statues to Japan should be withheld until more research is done to prove that Japan stole it in the first place is Moon Myung-dae, a Buddhist art historian, director of the Art History Research Institute of Korea and an honorary professor at Dongguk University.

In his dissertation, he argues that it is highly likely that the statue was looted by the Japanese during the late Goryeo period.

“[The record] says specifically that the statue is to be kept at the Buseok Temple forever and nothing about transferring it to Japan’s Kannonji Temple,” he wrote. “Usually when a statue is donated or transferred to another temple, it is recorded so.”

But there are those that argue that the issue should be approached with extreme caution, rationale and logic - rather than emotion, nationalism and deep-rooted resentment toward Japan that stem from its colonial rule and unresolved matters from that period.

Kang Woo-bang, the director of the Ilhyang Research Institute of Korean Art History, argues that “it is a fact that the statue was originally in Korea’s Buseok Temple, but at the moment it is unclear if Japan stole the statue from the temple. As the statue was stolen from Japan and smuggled into Korea, it is only right that we return it for now and work for its repatriation.”

Professor Heo Kwon of the Korea National University of Cultural Heritage also says that “if there aren’t any views that are accepted by both Korea and Japan and Korea doesn’t find any evidence that Japan stole the statue, the statue has to be returned in line with Unesco’s 1970 Convention on the Means of Prohibiting and Preventing the Illicit Import, Export and Transfer of Ownership of Cultural Property.”

Heo, who had worked for the Korean National Commission for Unesco, said that “while Japan should acknowledge Korea’s history, Korea should also recognize Japan’s work in managing the relic all those years.” He added that in addition to respecting each other and continued reflection on morality, the two should also be cooperative in research.

“The reason that Buseok Temple is seeing little progress in its investigation [into how the relic ended up in Japan] is because Japan is withholding related documents. The ball is in Japan’s court,” he said.

Kim Hyeong-nam, a lawyer at Shin-A Law Firm who has led many cases on cultural properties, said at a forum earlier this year that “we should stay away from nationalistic patriotism. But we also shouldn’t turn a blind eye to historical issues and call for maintaining good-neighborly relations,” adding that “the discussions for the repatriation must take place with complete understanding of where each other is coming from.” 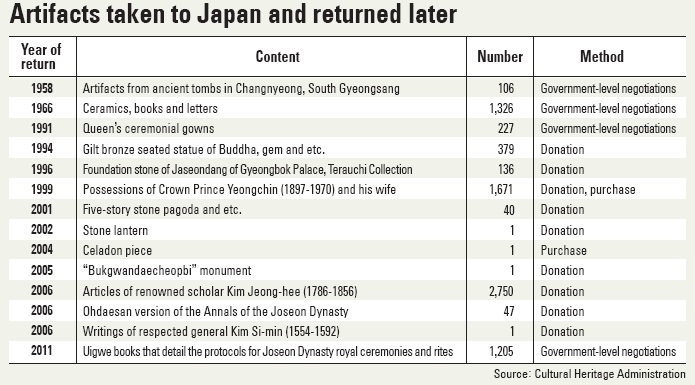 The biggest concern of those that call for caution is the impact this case could have on nearly 150,000 Korean cultural properties kept overseas - 44 percent of which are in Japan.

“Should Korea handle this case badly, it could be a stumbling block in repatriating other Korean cultural properties from overseas,” Heo said. “It could block any Korean attempt - government or civil - to the repatriation work. So we should look at this in a broader perspective, long-term work.”

Experts on cultural properties’ repatriation issues also say that the recent cases have proved that a cooperative approach is far more effective than emotional ones.

In the past, there was a saying that if all displaced cultural properties were returned to their homelands, some museums in the West would be empty. But there is an increasing number of precedents worldwide recently in which artifacts were returned after research proved the illegal route through which they were displaced.

In January, the J. Paul Getty Museum in Los Angeles said it will be returning a terracotta head dating from about 400-300 B.C. to Sicily as its research found that the head’s original location was the site of a sanctuary to the goddess Demeter in Sicily that was “clandestinely excavated” in the 1970s. Also, in May, the Metropolitan Museum of Art in New York agreed to return two ancient statues to Cambodia after receiving convincing evidence that they had been looted and smuggled out of the country.

There are some cases of Korean relics being returned after it was proved they were illegally displaced.

U.S. Immigration and Customs Enforcement officials returned a Hojo currency plate to the Korean government last month. The 19th-century plate is one of only three in existence, and it is thought to have been looted from Deoksu Palace in Seoul by a U.S. soldier during the 1950-53 Korean War.

Last month, the Los Angeles County Museum of Art (LACMA) said it will return a turtle-shaped, 16th-century seal that belonged to Queen Munjeong (1502-65), the third wife of King Jungjong of the Joseon Dynasty (1392-1910). Sources in Korea said LACMA found that the seal was smuggled into the United States in the early stages of the Korean War.

Still, some Korean observers also note that getting cultural properties through government-level negotiations is very unlikely, given the track record so far. Representative Yoo Ki-hong of the main opposition Democratic Party quoted data by the Cultural Heritage Administration to show how only 11 of the 132 repatriation cases since the establishment of the Republic of Korea in 1948 were through government-level negotiations.

“The Korean government must step up its efforts in the repatriation of cultural properties by reviewing Unesco clauses and international laws, as well as supporting and working with civic groups,” Yoo said last month.