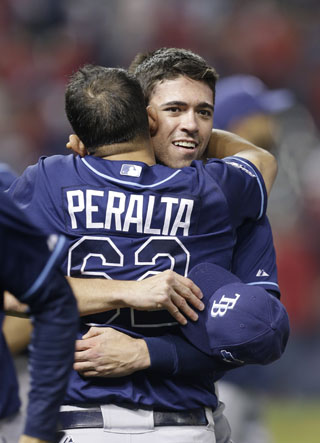 Alex Cobb dodged trouble for nearly seven innings and the Rays pitched their way to another must-have win on the road, beating the Cleveland Indians, 4-0, Wednesday night in the AL wild-card game.

Cobb, who missed a chunk of the regular season after he was hit in the head by a line drive, quieted a thundering Cleveland crowd and ended the Indians’ unexpected season.

Delmon Young homered in the third inning off rookie Danny Salazar as the Rays, playing in their third city in four days, advanced to face the AL East champion Red Sox in the division series starting Friday.

The August comeback of Cobb from his frightening injury helped stabilize the Rays, who have spent the past two weeks winning crucial games to make the postseason for the fourth time in six years.

Cobb pitched out of massive jams in the fourth and fifth and allowed two runners to reach base in the seventh before turning it over to Tampa Bay’s dependable bullpen.

Fernando Rodney worked a perfect ninth, striking out Lonnie Chisenhall to end it. Rodney dropped to one knee and pointed skyward and soon was mobbed by all the Rays, who may be a little homesick but are Boston-bound.

Unfazed by a raucous, red-clad, towel-waving crowd of 43,579 that roared like a jet engine inside Progressive Field, the Rays handled the Indians and will now face their division nemesis, the Red Sox, who went 12-7 against Tampa Bay this season.

David Price set the tone for the Rays’ postseason run by throwing a complete game to beat Texas in the wild-card tiebreaker, and Cobb picked up where his teammate left off. After he was pulled in the seventh, Cobb walked to the dugout, where he was first greeted with a high-five from Price.

The Indians went from 94 losses a year ago to 92 wins under first-year manager Terry Francona and won their last 10 games to make the postseason for the first time since 2007.

But it was one and done for Cleveland, which didn’t capitalize on scoring opportunities. The first three hitters, Michael Bourn, Swisher and Jason Kipnis, went a combined 0 for 12. AP