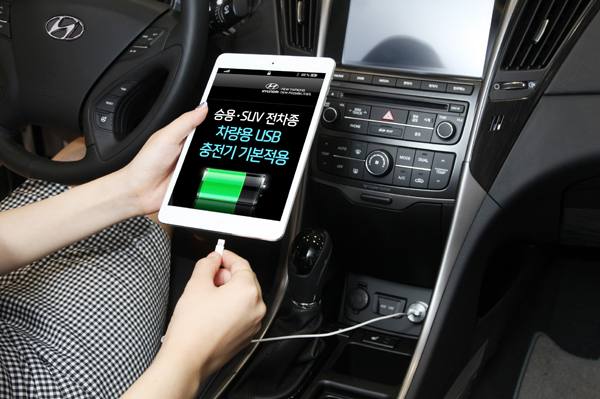 A smartphone and tablet charging socket installed in a Hyundai vehicle. The Korean automaker said it has placed USB chargers where the cigarette lighter jack used to be on 16 models starting this month. Provided by the company

Cigarette lighters are disappearing from Hyundai Motor vehicles, and the nation’s largest automaker is replacing them with USB chargers for smartphones and other electronic devices starting this month. All 16 passenger vehicle models and SUVs will have them as standard equipment, a first in the world.

Models like the Porter small truck, the Starex commercial van and other special-purpose cars like taxis or rental cars will not come with chargers. The company said its consumer surveys showed that the number of drivers using cigarette lighters is decreasing as people quit smoking entirely or avoid smoking inside their cars.

“As IT devices like smartphones and tablet PCs have become common, we decided to put USB chargers instead of cigarette lighters as a basic feature, a first in the world,” the company said in a release. “We always put our best effort to meeting customers’ needs.”

The automaker said there will be no price hike resulting from the switch from cigarette lighters to chargers. Hyundai said that its USB chargers will charge devices seven times faster than other USB chargers in cars. A normal smartphone will be fully charged within an hour, according to the automaker.

While Hyundai’s system still requires a cable to charge a device, other carmakers are looking to install wireless charging devices for smartphones in their vehicles.