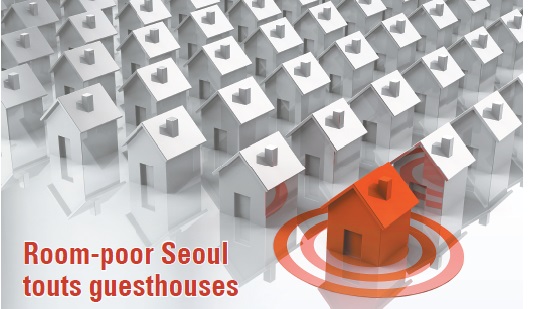 To anyone considering opening a guesthouse, the Seoul Metropolitan Government has a message: The capital city is the perfect place.

For the past three years, the average annual increase in the number of tourists exceeded 12 percent, six times Korea’s rate of economic growth over that period.

However, the supply of accommodations is far from sufficient to meet the ever-growing demand of millions of tourists each year.

According to the Korea Tourism Organization (KTO), 11 million international tourists visited the country last year and the number is expected to reach 12 million this year, 13.8 million in 2015 and 19.6 million in 2017.

“It is an unusual phenomenon given the current global economic woes and consumption downturn,” said a KTO spokesperson.

Because the Korean government, especially the Seoul Metropolitan Government and the KTO, did not anticipate the sudden increase in tourism, they have been bombarded with complaints from visitors about a lack of accommodations.

Of the 11 million tourists last year, about 11.7 percent stayed at guesthouses or hostels, according to the Ministry of Culture, Sports and Tourism, which estimates that more than 2 million foreigners will stay at guesthouses in 2017.

Much of the increasing demand for low-cost guesthouse accommodations will be driven by the arrival of more young tourists and backpackers, according to the ministry.

“I chose a guesthouse over hotels through the B&B Seoul Web site, which provides information about homestays and guesthouses in English, Japanese and Chinese, as I wanted to experience Korean home culture and food, as well as have opportunities to meet other tourists here,” said 25-year-old Japanese tourist Kiriko Fujiwara, who was staying at a guesthouse in Hongdae.

“Including the unregistered guesthouses, we estimate there are about 1,000 of them altogether in Seoul,” said a city government official.

Yet the lodging supply still doesn’t come close to meeting the demand in Seoul, with an average of 2,500 rooms lacking each day.

There are many cases where tourists stay at motels, inns and hostels outside of the capital to tour Seoul.

“I came to Korea yesterday just to travel in Seoul, but I am staying at a hotel in Incheon, as it was impossible to book a room in Seoul. It takes about 40 minutes to get from Incheon to Seoul every day. It would have been better if I stayed at a hotel in Seoul, but in that case I would have had to postpone my trip for too long,” said Na Yu, a 27-year-old from China. “Some of my friends have even canceled their trips to Korea after struggling with booking a room in Seoul.” 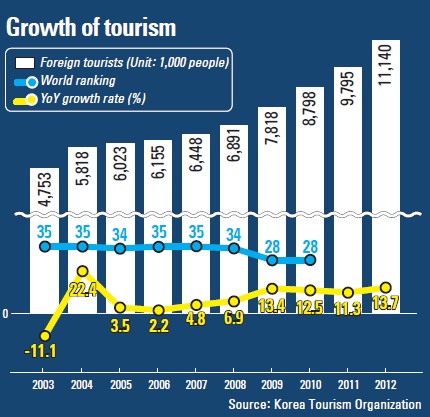 Last year, there was a large protest by Chinese tourists who purchased a package with the local travel agency that took them to a 24-hour sauna - instead of a hotel - to spend the night.

As the chronic shortage of hotels in Seoul has led to a vicious cycle of more expensive room charges, rudeness and booking cancellations, about 3 million foreign tourists turned to neighboring countries last year, according to the KTO.

One of the biggest advantages of opening a guesthouse is that it requires a relatively small investment, especially if utilizing existing houses or a spare room. There are many cases where operators have started in the guesthouse business by installing a separate door to provide a separate entrance.

Also, laws and regulations tend to be vague since guesthouses are not categorized as lodging businesses under the Public Health Control Act.

“People have easy access to opening a business, as all they have to do is to renovate their houses and post the information on social lodging sites like Air BnB, BnB Hero, Kozaza, B&B Seoul, Vookmate and Home Exchange,” said a marketing manager at Air BnB. 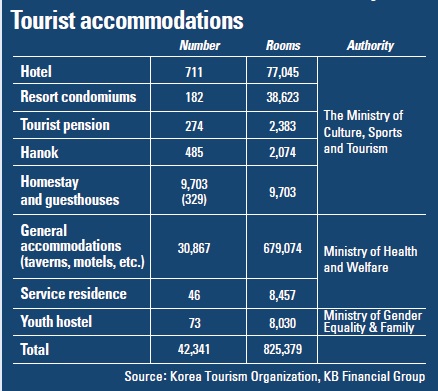 Since Jan. 1, 2012, anyone who lives in flats, apartments, houses and townhouses with less than 230 square meters (2,476 square feet) can rent out rooms as a business after being designated as a guesthouse for foreign tourists by the district offices in Seoul.

“There is no separate cost for operators to pay the city government, and they can determine the room charges as they wish,” said a Seoul city government official. “As the urban guesthouse business has grown outside the institutional realm of the government and the demands of foreign tourists are significantly growing, we do not necessarily clamp down on unregistered guesthouses.

“The only reason why we started receiving registration is to provide official support to the operators.”

In addition, the profitability of operating a guesthouse is much higher than renting out urban residences or studio flats, where there has been an oversupply.

“In particular, guesthouses can make at least 10 percent profit, especially if they are located in Hongdae, Sinchon and Jongno, where foreigners visit the most,” said a real estate agent in Sangsu-dong, near Hongdae.

Considering a landlord’s typical profit of 4 percent to 5 percent from urban residential and studio flats, the profitability of guesthouses is at least twice as high.

“The initial investment cost me about 10 million won ($9,310) to renovate the house and equip the rooms, but the fixed monthly income is about 4.5 million won even after I pay rent and other costs, I still get more than 2 million won every month,” said a guesthouse operator in Hongdae

“I started this business about four years ago and the number of foreigners has been growing. It has been a full house almost all the time. Recently, I opened a second guesthouse just around the corner, about two-minute walk from here by renting the house.”

Accordingly, the Seoul Metropolitan Government has begun to support guesthouses as there is almost no land left to build hotels in Seoul and they are a great business opportunity for retirees with houses. One of the services is free start-up training on opening a guesthouse business.

On Sept. 12, the Seoul government held a seminar to attract urban guesthouses at the Global Tourism Center in Myeong-dong, central Seoul, as a follow-up to its first seminar held in the spring.

At the seminar, the city government and the specialized agencies provided information on the urban guesthouse law, skills needed for operating guesthouses, tips on dealing with foreigners, utilizing the PR opportunities and loan schemes by the Seoul government.

They also introduced several successful guesthouses, which are currently operating.

The Seoul government designated September and October for intense promotion of guesthouses as Korea experiences a huge influx of Chinese tourists during these two months. According to the KTO, about 35,000 Chinese visited Korea each day during China’s National Day holiday period last year.

By publicizing guesthouses through various media, the city government aims to attract citizens with houses to participate in the lodging.

It also plans to install signs at subway stations in these areas with information on nearby guesthouses in English, Chinese and Japanese.

The government also is set to secure additional tourist accommodations such as homestays and hanok (traditional Korean house) experiences.

Although guesthouses are deemed to be highly profitable, those who are considering opening a business should do their homework.

If the cost of purchasing or renting a house and renovations are too high, the return on investment will be less.

In particular, industry sources say that in the Gangnam or Seocho districts near Gangnam Station, rents are twice as high as those across the river in Gangbuk.

“Especially for small guesthouses with two or three extra rooms, they should compete with the mid- and premium-priced strategy receiving at least 80,000 won per night to cover the labor costs,” said a spokesman for the government-affiliated Small Enterprise Development Agency.

In addition, because many backpackers looking for guesthouses are in their 20s and 30s, a fashionable design and concept is important.

“To increase the chance of success while not investing too much, operators should differentiate their promotions and interior designs. If they could speak foreign languages, it would also help in promoting the business through word-of-mouth,” said a guesthouse operator in Yeoksam-dong, Gangnam. “They should also take note that guesthouses require a lot more cleaning and cooking.”

Furthermore, if guesthouses are not located in the core commercial areas of Gangnam, Itaewon, Hongdae, Jongno and Myeong-dong, they may be less competitive.

Those interested in opening and operating guesthouses also can consult with specialized franchise companies, the city suggests.

In addition, there is regularly held free start-up training conducted by the Small Enterprise Development Agency. The Seoul Metropolitan Government also runs a free guesthouse academy each month for 250 participants that will continue through the end of this year.