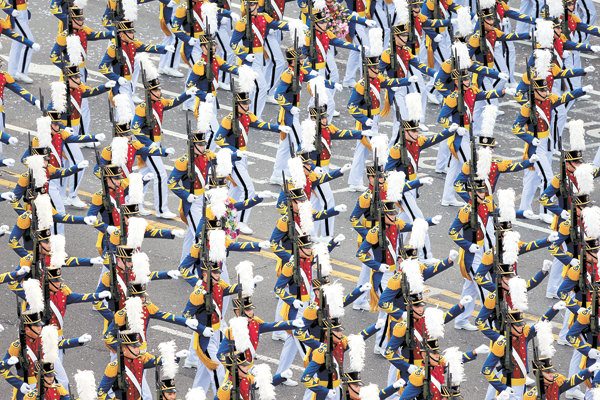 Cadets of the Korean Military Academy, arms akimbo and ranks less than razor straight, march in central Seoul during the 65th Armed Forces Day parade, the largest in a decade, on Tuesday. [NEWSIS]

Korea celebrated its 65th Armed Forces Day on Tuesday, staging its first official military parade in five years, but criticism has risen about the lack of discipline and orderliness of the soldiers during the procession.

In some cases, reserve soldiers were seen as careless, lined up crookedly and marching off cadence.

The event was attended for the first time by a U.S. secretary of defense, Chuck Hagel, as well as Gen. Martin Dempsey, chairman of the U.S. Joint Chiefs of Staff, who were both in Seoul for military talks as Korea and the United States celebrate 60 years of a mutual security alliance.

But the parade, which was aired live on television, showed soldiers who started marching at Seoul Air Base in Seongnam to be marching with less than military precision, not matching steps or arm swings and resulting in skewed formations. Some military academy cadets were apparently confused about which arm should swing on which step.

Flag officers in one military jeep were captured on TV laughing as they reached a point where they needed to salute President Park Geun-hye.

Yeom Don-jay, dean of Sungkyunkwan University’s Graduate School of Strategic Studies, told the JoongAng Ilbo Wednesday, “Because the lines did not match and the strides were short, I did not feel their vitality. It was like watching a disorderly army.”

Other senior officials watching the parade agreed that there was “a lack of military discipline” or said the soldiers “lacked training.”

In the afternoon, the parade continued toward central Seoul, to Seoul Station and Gwanghwamun, but the formation was even more scattered. Some soldiers were distracted, watching all the people that had come out to watch the parade and gazing up at those who were watching from the rooftops of high-rise buildings instead of looking straight ahead.

Some lamented that the parade “was a far cry from our army’s top-notch image of past Armed Forces Day events.”

“Even if the era has changed, the army has to remain strict,” said Gen. Yang Chang-sik, adviser to the Korean Parliamentarian Society. “Even if they may be slightly more relaxed in daily army life, they cannot slack off like this in an official military event.”

Since 1993, such massive Armed Forces Day parades have usually been assembled every five years to mark the first year of the administration of a new president.

A military official said, “In the 2008 event, there were 6,000 soldiers, and because the number doubled this year, a lack of overall planning may have been revealed.”

Another army official blamed the sloppy formations on a lack of cadence calls, saying drum beats could not be heard well during the parade. But past large military parades did not seem to reveal this problem.

Other experts had a different take on the matter, saying that the change in the ambiance of the military is an indicator that Korea has moved past the days of colonization and authoritarian military rule, and that it was not right to compare the South’s army with that of the bellicose North Koreans’ orderly military.

Yang Uk, a senior researcher at the Korea Defense and Security Forum, said, “The soldiers’ bright and natural image can be seen as more befitting the nature of the parade, which is ‘an army together with the people.’”

He contended that in the United States and other countries, military parades were like costume parades, promoting a friendly, approachable image of soldiers.

Army officials said that in preparing for the parade, reserve soldiers had pitched tents at Seoul Air Base and had trained since July.

One official involved in the 65th Armed Forces Day preparations said that some commanders trained the soldiers so hard that their voices became hoarse and that “though there were some soldiers who moved their legs wrongly, rather than calling it a lack of training we just have to understand it as a characteristic of a new generation of soldiers.”