Get your hands dirty, make pottery at biennale

Get your hands dirty, make pottery at biennale 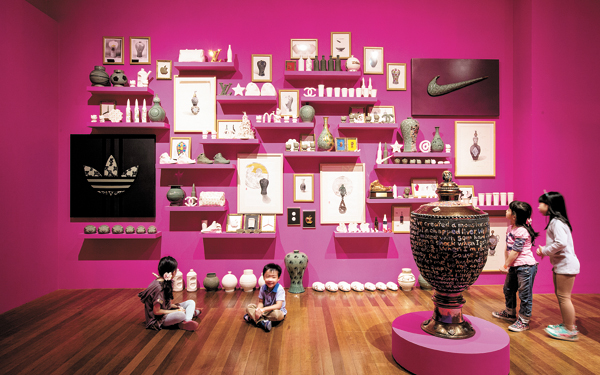 Children play in front of artwork by Yoo Eui-jeong at the Gyeonggi International Ceramic Biennale that is underway at three different cities in Gyeonggi. By Shin Dong-yeun

When we talk about ceramics, most people think about round-shaped pots like the famous white porcelain pieces from the Joseon Dynasty (1392-1910)or the blue-green celadon from the Goryeo Dynasty (918-1392).

However, there is far more to ceramics than those items. It is a genre of art, and anything made of clay falls under the category.

On Sept. 28, the Gyeonggi International Ceramic Biennale, organized by the Korea Ceramic Foundation, kicked off its 51-day run in several parts of Gyeonggi. They include Icheon, an area that takes pride in its centuries-old reputation in high-quality ceramics, Gwangju and Yeoju.

As the name suggests, the biennale is an event that takes place every two years, and this year marks its seventh edition. In fact, few people know this, but Gyeonggi International Ceramic Biennale is believed to rub shoulders with some of the world’s most renowned ceramic biennales, like International Ceramics Competition Mino of Japan and Faenza’s Contemporary Ceramic Biennale of Italy.

With the fall weather in full bloom, the JoongAng Ilbo suggests the Gyeonggi International Ceramic Biennale as the venue for a fall getaway.

Our participation in the press tour between Sept. 27 and 28 found that the exhibition halls are filled with all kinds of intriguing pottery, with some even making us doubt they were indeed made of soil: There were works shaped after humans and pieces from which green sprouts shot up.

“Pottery is the type of art where artists will have to do everything with their own hands,” Kim Jin-a, one of the curators at the biennale said when asked about the difference between pottery and other types of art.

In addition to the vast venue made up of various themed areas, the biennale offers a variety of programs for children. They can touch the clay soil and play with it, just like the older generation did when they were young and living in an era without high-tech toys. In fact, here and there at the biennale’s venue are banners that read “Let’s Play with Soil.”

Children race on toilet-shaped ceramics at the biennale, left, which has many programs tailored for children. Right, a view of Cerapia in Icheon, one of the venues of the biennale, which runs until Nov. 17.

There are some experience programs in Icheon, Yeoju and Gwangju in Gyeonggi that run throughout the year, not just during the Gyeonggi International Ceramic Biennale. However, this specific program only runs during the biennale. It consists of three spaces for different purposes: education, experience and play. At the education zone, people can learn about the history of ceramics, among other things. At the experience area, visitors can make ceramic folding screens. The most popular part of the play zone is the “ceramic racing” area. Children can sit on toilet-shaped ceramics with wheels on the bottom and race along a rail. People can also play ceramic musical instruments and go bowling or even fishing.

•••Play all you want

Imagine all kinds of recreational activities that you can do with clay. This is the program where most of them would exist. There is a game in which families compete with other families to see who can build the highest pack of clay. They are given 5 kilograms (11 pounds) of clay and 20 minutes. Families can also compete to see who can make a piece of pottery the fastest using a hand-operated spinning wheel. For this contest, they are given five kilograms of clay and 30 minutes. Judges will make their decision based on how thin and aesthetically pleasing the final results are. Another game is “who can make the longest spiral of clay.” This program runs twice a day. The winning teams are given awards.

In this program, people can make a piece of ceramic art of their own. Programs differ slightly depending on whether they are taking part in Icheon, Gwangju or Yeoju. In Icheon, there is a ceramic wish tree. The tree even has apples on its branches with butterflies sitting on them - all made of ceramic. Here, people write their wishes and hang them. In Yeoju, people can submit the photos they took at the biennale, and organizers will make them into a mug cup and picture frame. In Gwangju, there are 18 different programs where people can make their own piece of ceramic art. They can also try their hand at the traditional sanggam technique in which people make scars on ceramic surfaces and create patterns by filling them with soil of a different color.

Cerapia in Icheon and Gonjiam Ceramic Park in Gwangju are large-scale theme parks. In addition to various facilities, they also have camping areas. At Cerapia in Icheon, people can take part in a two-day camping program led by a potter. With his or her guidance, participants can make pottery and bake it in the kiln. In contrast, the camping program in Gonjiam Ceramic Park in Gwangju is not led by anyone, or operated on a set schedule - people can do whatever they want. They can tour the exhibition halls at the biennale or take a stroll at a nearby sculpture park.

At Icheon and Gwangju, there are pottery classes for children throughout the year. At Cerapia in Icheon, kids can make pottery of their own design, draw on premade cups and plates or make artwork using miscellaneous ceramic fragments and chips. And, of course, they are allowed to take home the art they made. At Gonjiam Ceramic Park in Gwangju, classes are free for groups. There, people can learn about the history of ceramics, as well as make mugs of their own design.


*The Gyeonggi International Ceramic Biennale runs until Nov. 17 at venues in Icheon, Gwangju and Yeoju in Gyeonggi. During its run, free shuttle buses will operate between the cities every 40 to 50 minutes. Besides the biennale, the Icheon Ceramics Festival, Gwangju Royal Ceramic Festival and Ceramic Festival 2013 Yeoju - each organized by respective regional governments - will also take place. Tickets to all three venues of the biennale in Icheon, Gwangju and Yeoju cost 10,000 won for adults and 5,000 won for children. The ticket can also be used for admission to nearby tourist attractions like Yongin’s Korean Folk Village, Icheon’s Termeden spa resort and Gonjiam Resort’s Hwadam arboretum in Gwangju. For details, contact 031-631-6501 or visit http://kocef.org.