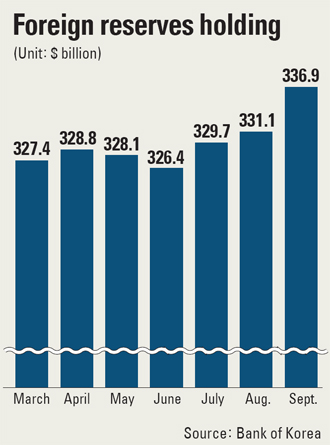 Foreign reserves held by Asia’s fourth-largest economy at the end of September stood at $336.92 billion, up $5.83 billion from a month earlier and extending their record-setting streak to a third straight month, the Bank of Korea said.

Korea sold $1 billion worth of 10-year U.S. dollar-denominated government bonds in September, aiming to set a new benchmark for other domestic debt issuers. The proceeds were almost immediately added to the foreign reserves after the sale, the central bank said.

The rise in September was the largest since foreign reserves jumped by $7.59 billion in October 2011.

The record total also would include the dollars that traders suspect the government bought through currency intervention, as local policy makers warned last month against excessive movement in the Korean won versus the greenback.

The Bank of Korea engages in what it calls market-smoothing action to reduce volatility in the foreign exchange market, details of which it does not disclose.

The won rose 3.3 percent against the dollar in September on foreign inflows.

Officially, the central bank also attributed the rise to the appreciation of several currencies in its reserves pool against the dollar, including the euro, the pound and the Australian dollar.

Korea had the world’s seventh-largest foreign reserves as of the end of September, 92.4 percent of which were in the form of securities.