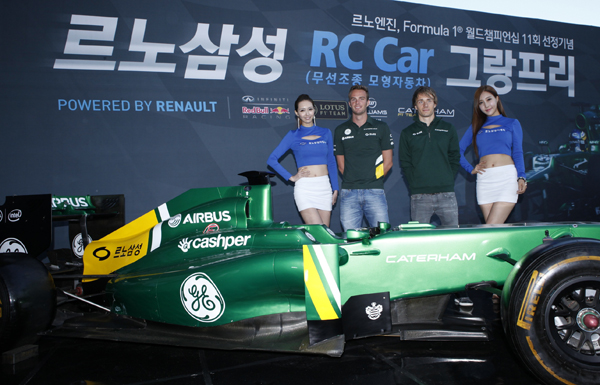 Automakers are gearing up for marketing themselves using the three-day Formula One Korean Grand Prix that began yesterday in Yeongam, South Jeolla.

Renault Samsung Motors, the Korean unit of French automaker Renault, said yesterday its logo will be attached to four cars of Lotus and Caterham, as well as their drivers’ helmets and racing suits.

This will be the first time the sponsor’s name will be on an F1 car in Korea.

The company held an event with Caterham drivers Giedo van der Garde and Charles Pic in front of Yongsan Station in central Seoul on Wednesday, displaying a car with the Renault Samsung logo.

RSM emphasized that its SM5 TCE and SM3 vehicles share some of the technology of Renault, which provides the RS27 engine to the Red Bull, Lotus, Caterham and Williams F1 teams.

The company will also hold a quiz event for visitors at the Korea International Circuit, offering its SM7, SM5 and SM3 as a lottery gift pick.

Mercedes-Benz Korea said yesterday it is inviting customers who bought its AMG models to the race. The Korean unit of the German automaker is offering free passes to the Paddock Club as well as a chance to meet Mercedes AMG Petronas drivers Lewis Hamilton and Nico Rosberg.

In September, the company handed out free tickets for the final of Korean GP through Facebook.

Infiniti, the luxury arm of Nissan, is offering a free talk by Paul Monaghan, the chief engineer of the Infiniti Red Bull Racing team, on Monday. He will give a lecture on F1 machine engineering at Hanyang University in Seoul at 4 p.m. to 200 guests who will get seats on a first come, first served basis.

The German automaker will transport them from Mokpo Station to the circuit in Mercedes vehicles, while offering them an up-close look at the Scuderia Toro Rosso team’s preparation in the pit.

Lexus, the luxury arm of Toyota, will feature all of its models during the Korean Grand Prix because they will support event operations.

Lexus, which is sponsoring the Korean Grand Prix for the first time, said its flagship sedan, LS, will be used as protocol vehicles for VIPs and high-ranking officials, while its ES will be used as an official patrol car. The RX SUV will be used as a medical service car, and the compact sport sedan IS will be given to operations officials.

Meanwhile, other companies not related to automobiles are also marketing themselves through the Korean Grand Prix. KT, the nation’s second-largest mobile carrier, which has a marketing agreement with Vodafone McLaren Mercedes, is holding its own F1 promotional event until Tuesday. The company will upload an exclusive interview with Jenson Button on its Facebook page, while operating 10 F1 photo zones nationwide.

Those who visit KT’s F1 Photo Zone and post a picture on their Facebook page will be eligible to win shirts and caps autographed by Button.