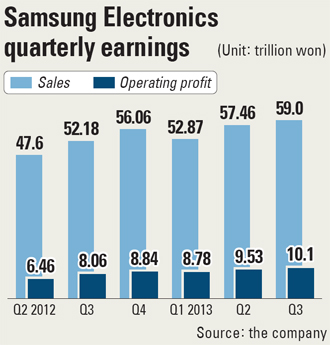 Samsung Electronics exceeded 10 trillion won ($9.35 billion) in operating profit in the third quarter, the first time a Korean company has done so, despite the company’s concern over a fast-maturing global smartphone market and sluggish sales of home appliances, especially high-end TVs.

Solid performance in the IT and mobile communications (IM) sector, in particular in low-end mobile phone markets, is widely credited with helping Samsung beat expectations.

In the guidance released yesterday, the tech giant said it recorded 10.1 trillion won in operating profit for the quarter ending Sept. 30, an increase of 5.98 percent from the previous quarter and 25.3 percent year-on-year. Samsung’s second-quarter performance had been a company record.

Third-quarter sales stood at 59 trillion won, up 2.68 percent from the second quarter and 13.1 percent from last year, the company said.

The company did not break down third-quarter performance by sector in the guidance, which provided the figures with a margin of error of 0.2 trillion won for operating profit and 1 trillion won for sales. Final earnings figures with details are expected to come out later this month after they are approved by Samsung’s board of directors.

But the market presumed that Samsung’s higher sales of cheaper smart phones - in particular in China, India and the Middle East - helped shore up the IM sector, which accounts for nearly two-thirds of the company’s profits.

Samsung’s operating profit in the IM sector dropped 3 percent in the second quarter from a record-high 6.51 trillion won in the first, in part due to lower-than-expected sales of the Galaxy 4 smartphone.

According to an estimate by local brokerage firms, the third-quarter figure beat the first quarter’s, a surprising feat given underwhelming Galaxy 4 sales. The brokerage firms estimated that Samsung sold 16 million Galaxy 4 units in the third quarter, down from 20 million in the second quarter. Samsung released its new flagship smartphone, the Galaxy Note 3, on Sept. 25.

“Not only their flagship models, but their low-end and mid-market smartphone lineups have been faring well,” said Won Seo, an IT sector analyst at Korea Investment and Securities.

Seo, who lowered his expectations for Samsung’s operating profit in the third quarter from 9.84 trillion won to 9.73 trillion won, now says there is still room for further upward revision in the fourth-quarter, which he previously predicted will be 10.2 trillion won.

Samsung released its ambitious Smart Gear smartwatch accessory simultaneously with the Note 3 and expects that the device, which it said significantly enhances the functions of the 5.7-inch phablets, will help boost sales. The two products were released in 58 countries Sept. 25 and will be sold in about 140 countries by the end of this month, the company said. Bloomberg projects Samsung has sold 3 million Note 3 units so far.

Samsung’s chip business is also seen to have improved, thanks in part to its smartphone archrival Apple. The chip used in the A7 processor in the iPhone 5 is produced by Samsung, the world’s largest memory chip maker. Apple announced it sold 9 million iPhone 5S and iPhone 5C models within three days of release last month.

A market estimate yesterday showed that Samsung’s semiconductor business raked between 9.5 trillion won and 10.1 trillion won in sales and 2.1 trillion won to 2.3 trillion won in operating profit in the third quarter. The expectation for the business in the fourth quarter remains positive thanks to sustained growth of chip prices. The benchmark DDR3 2-gigabit dynamic random-access memory chip rose from $1.60 on Sept. 4 to $2.33 on Thursday.

Manufacturers of large televisions saw increasing price competition worldwide, and Samsung’s operating profit in the segment is estimated to have decreased as much as 50 percent from the previous quarter, according to a brokerage.

It remains questionable whether the smartphone business can continue to be a cash cow.

“Korea’s high-end smartphone market, which accounts for most of the smartphone products sold in the country, will eventually see a decline in sales,” said Kim Pil-soo, a senior researcher in the new industry division of Hyundai Research Institute.

Song Jong-ho, an analyst of KDB Daewoo Securities, disagreed, saying half the cellphones in use - about 1.7 billion - are not smartphones.