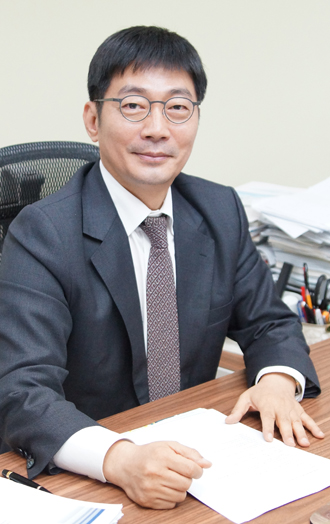 A 30-year-old idea by an undergraduate at Kyung Hee University has blossomed into a Korean language institute at the school that celebrated its 20th anniversary on Tuesday.

Kim Jung-sup was a Korean language and literature student at Kyung Hee in Seoul’s Dongdaemun District three decades ago, and recalls watching lines of tour buses filled with American soldiers touring the campus. They arrived eager to see what a Korean school looked like but always got on the bus again, never to return.

“The school seemed enthusiastic about globalization, but all I saw were buses passing by puffing clouds of thick black smoke,” said Kim, 54, now the dean of the Institute of International Education at KHU and a professor of Korean language and literature.

“That’s when the idea popped into my head; can’t we teach those strangers Korean in our midst to create a genuinely international campus?”

The spontaneous question germinated in his mind, leading to the founding of a language institute at the school in 1993, the IIE. The institute popped the corks on champagne bottles earlier this week at Crown Hall on the KHU campus.

About 700 guests participated in the ceremony, including the president of the university, Choue In-won; the head of the National Institute of the Korean Language, Min Hyun-sik; and the ambassador of Panama, Aram B. Cisneros Naylor.

“We look forward to partnering with the IIE to make greater leaps in Korean education,” Choue said in his congratulatory address.

A two-day international conference in conjunction with the anniversary discussed the development of Korean education in the future.

“We have just finished writing the first chapter of the IIE,” Kim said. “Mark my words; the second and third chapters will be just as promising.”

The language institute at KHU has 1,500 faculty members here and overseas, with the goal of promoting Korean language education globally in cooperation with government ministries. The IIE recruits about 6,000 international students from about 90 countries annually; those enrolled include teachers, journalists and families of diplomats in Korea.

Kim is also the former president of the International Association for Korean Language Education. He says passion and good execution are the keys to IIE’s success. “You need good teachers, good facilities, good books and good programs to attract the best international students,” Kim said, “We at IIE wholeheartedly dedicate ourselves to guaranteeing all that.”

The next step for IIE will be to expand its range of Korean studies from the current focus on the language to include stress Korean politics and economics. It also seeks to reinforce online learning programs for students abroad.

The “corporate innovation” will be complete within the next decade, Kim promised. “It will be the driving force of the next 20 flourishing years.”