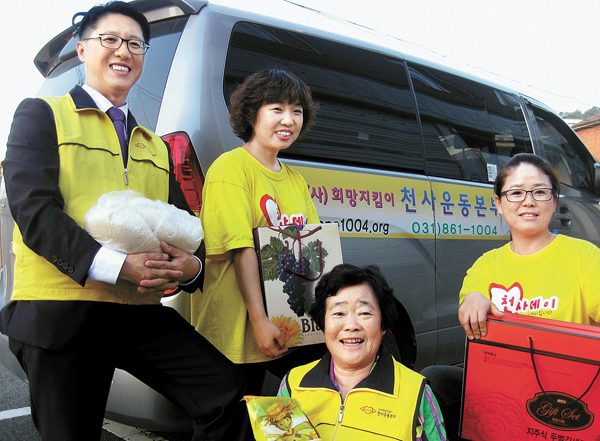 Members of the Hope-keeping Angels Volunteer Group in Dongducheon smile while passing out supplies to their neighbors in need. By Jeon Ik-jin

A volunteer group that started in Dongducheon, Gyeonggi, celebrated its 10th anniversary on Thursday.

The Hope-keeping Angels Volunteer Group is the modern version of its predecessor, the “True Light Association,” which was organized in 1994 by citizens willing to volunteer in the community. Since then they have widened the range of their work in helping people and society.

The precursor group began by performing on the streets to raise money for families headed by adolescents or children, and 20 of them established a formal organization. They collected 10,000 won ($9) from each member to support their work.

Kim Ji-uk, a founding member of the Angels, said they revamped the group to reach more of their neighbors who had fallen in between the cracks of the government’s welfare programs. Kim, who is visually impaired, led the group for five years beginning in 2006.

Still, she has been donating 10,000 won every month since October 2009 for the Angels to help others. She said she had heard about the volunteer group from social workers and volunteers who came to help her.

“Since I know what it is like to scrape by in life, I wanted to help even if it is a small amount of money,” Kim said.

Lim Kyung-ae lives in Sangpae-dong. The volunteer group helps take care of her family, who all live in a single room, including her mentally ill son and a husband who has health problems. Thankful for the unselfish service she has received, Lim has donated 10,000 won every month to the group for seven years.

“When the rain was leaking from our roof in 2006, the Angel volunteers repaired it for free,” Lim said. “I try to help because I was so touched and grateful.”

The Angel volunteers started by repairing houses for those who lived alone and were disabled. The group has now become better known and an increasing number of people have joined to help. Currently there are 3,028 registered members in Dongducheon.

It has spread to 14 other cities, including Namyangju in Gyeonggi and Cheonan in South Chungcheong, and has about 14,000 members nationwide. With increased donations, the group is now helping people who suffer from leukemia or childhood cancer. The group said that the majority of its members are like Lim and Kim, who joined the group after receiving support, and others who are not themselves in good economic positions.

And Kim faces a new problem that prevents her from continuing to donate money, although that may be the least of the problems she faces. Her basic welfare payment has been halted because the government says she has two sons, even though she says she has lost contact with them.

“Not only can I not pay my rent anymore, but I can’t help others. That’s also a big problem for me,” Kim said.