Saenuri hopeful is a bit tarnished

Saenuri hopeful is a bit tarnished 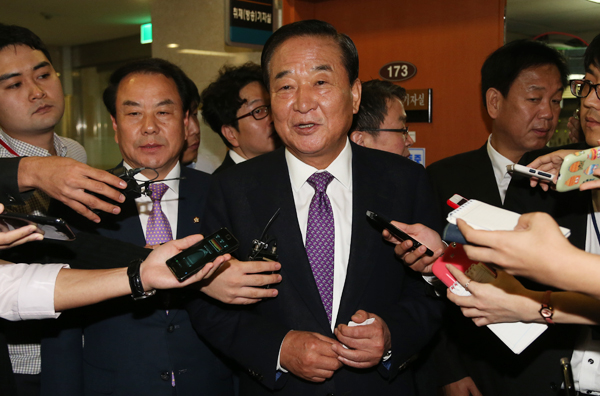 Former Rep. Suh Chung-won, who was nominated by the Saenuri Party leadership yesterday to its election slate in Gyeonggi province, talks with reporters at the National Assembly building yesterday. [NEWSIS]

With their eye on the Oct. 30 by-election, the Saenuri Party leadership yesterday nominated former Rep. Suh Chung-won, a well-known politician and supporter of President Park Geun-hye, to its slate in Gyeonggi province.

But the leadership came under fire because of the nomination; Suh has a criminal record after being convicted of election-related bribery in 2009.

At a closed-door party meeting yesterday, the leadership agreed to nominate Suh as its candidate for the Hwaseong A District seat in Gyeonggi.

On Thursday, Hong Moon-jong, a Saenuri member in charge of the party’s nomination for this by-election, said at a press briefing the party hoped that Suh could draw votes because of his long experience in government affairs.

“In an underdeveloped city like Hwaseong, there are expectations that a well-known politician like Suh could resolve some local problems,” Hong said Thursday. “Although we know that there are some negative views because of his earlier violations of the Political Funds Act, we judged that he has fully repented of his deeds.”

In August 2008, a Seoul court handed Suh an 18-month sentence on a charge of receiving 3 billion won ($2.8 million) from two party members in return for exerting his influence to nominate them to the party’s proportional candidate list for the May 2008 general elections. The Supreme Court upheld the ruling later.

The 70-year-old politician is known as an inner-circle member of the Park Geun-hye faction in the Saenuri Party. A six-term lawmaker, he was chairman of Saenuri’s predecessor, the Grand National Party, in 2002 and a senior advisor to Park in 2007 when she opposed Lee Myung-bak in the party’s primary election to select its presidential candidate.

Suh also launched a “pro-Park coalition” in 2012 to rally public support for Park during her successful bid for the presidency in last year’s election.

Rep. Park Min-shik, one of the Saenuri Party members who protested Suh’s nomination, told a radio interviewer yesterday the party’s action “doesn’t make sense at all.”

“I doubt that the nomination will appeal to public,” Park said yesterday. “Even if he wins in that constituency, we would still lose the cause and also the people.”

Democratic Party stalwarts, representing the largest Assembly opposition bloc, said they suspected the Blue House of pressing the party to select Suh because of his links to the president.

“Saenuri’s nomination of a politician known as a symbol of corruption must have been affected by pressure from the Blue House,” Lee Un-ju, a DP spokeswoman, told a briefing yesterday.

The DP has not decided whom it will nominate for the Hwaseong city seat yet.

Suh’s stature, tarnished or not, may give them pause. Some members are recommending Sohn Hak-kyu, a four-term lawmaker and former DP chairman, to stand against Suh.

Sohn recently returned to the country after eight months of study in Germany, raising expectations that the timing of his return was linked to his desire to get back into political life at the assembly.