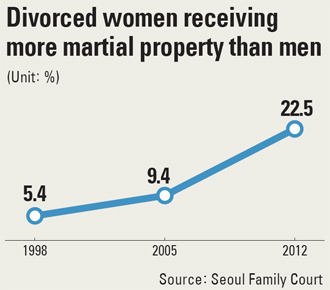 When her 26-year marriage was dissolved, a 52-year-old housewife who wished to remain anonymous thought the biggest concern would be money rather than emotional pain. Her ex-husband had earned the vast majority of the couple’s marital property while she took care of their daughter and son at home.

The wife filed a divorce suit after learning that her 56-year-old husband had had an extramarital affair.

But the court’s recent decision was actually in her favor, mandating a 70-30 split of the property. She now expects to receive 190 million won ($177,000) of the 270 million won in marital property they amassed.

“Aspects including each party’s age, ability to make money and the cause of the divorce have been taken into consideration,” the judge said.

“The husband makes 60 million won annually and is also eligible for pension benefits. On the other hand, the wife has to raise a daughter diagnosed with cancer and a son who needs to prepare for a college entrance exam this year possibly without any available income,” the judge at the Seoul Family Court explained.

The story reflects a changing trend in Korean divorce; an increasing number of women receive a larger share of marital property after a divorce than in earlier years. The number of divorced women who were granted more assets than the men were over 22 percent of all divorcing women last year, a big increase from the 5.4 percent of 1998. The figure came from a research conducted by Professor Jeon Gyung-geun of the Ajou University Law School and Song Hyo-jin, a researcher at the Korean Women’s Development Institute. They announced their findings on Wednesday at a forum marking the 50th anniversary of the founding of the Seoul Family Court.

Legal professionals say that the shifting trend reflects the rising status of women. “Laws pertaining to marriage and divorce have become more women-friendly than in the past,” Song said. “This is partly because women have bigger voice than before and the value of household chores is appreciated in a different way than it was in the past.”

Until the early 1990s, the Family Court ruled consistently that a husband should have the lion’s share of marital property if the man had been the sole provider. But judges then began considering housework as an important contribution to a marriage.

“The common perception until the early 1990s was that husbands usually contributed most to a family’s financial status,” said Yoon Jae-yoon, an attorney at Sejong Law Firm. “But, the recent property distribution rulings take into account housewives’ domestic chores.”

Many legal experts cited the prospective as well as the current economic situation of each spouse as one of the core factors that determine property distribution. “In the past, a property division lawsuit was limited to deciding the share of property that the couple had at the time of divorce,” said Kim Jin-ok, a spokesman for the Seoul Family Court. “But now, the court takes into consideration the future financial situation of each party.”