Coaches differ on tactics for extracting an apology

Coaches differ on tactics for extracting an apology 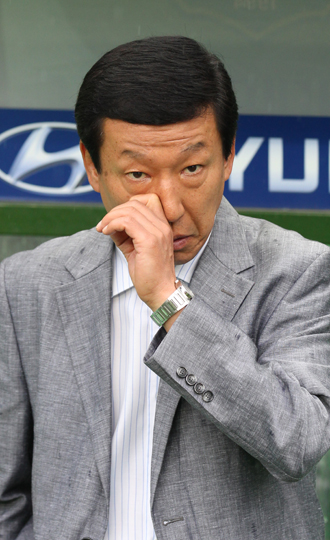 When the current head coach, Hong Myung-bo, announced last week his 25-man roster for the friendly matches against Brazil and Mali, reporters who filled the press room at the Korea Football Association were surprised that the name of the 24-year-old midfielder was included.

Ki was once a David Beckham figure in South Korea thanks to football talent, a handsome face and his marriage with actress Han Hye-jin. But in June, he came under fire for mocking Choi on his Facebook page. The taunts were publicized on the Internet by a football analyst, and Ki soon lost many fans and his spot on the national team. Coach Hong didn’t call up the talented midfielder, who currently plays for the English Premier League’s Sunderland, for two friendly matches early this month, but after visiting the U.K. later in September, Hong included Ki in his lineup for the October friendlies. However, he told the media last week that Ki should make a “sincere apology” to Choi before he joins the national team.

Under Korea Football Association rules on player ethics and behavior, a player judged by the KFA disciplinary committee to have brought disgrace upon or caused a rift within the national team can be banned or expelled from national competition.

Some critics praised Hong for trying to reunite the team and also manage a player with a prima dona personality, but others dislike the ultimatum to apologize or not play.

The national team had a hard time finding a good defensive midfielder to set up the team’s attack.

Fans have wondered whether Ki would bow to his coach’s wishes and offer an apology to Choi. While the media continued to churn out stories about Ki, Hong met with the press again on Thursday and turned the screws tighter.

“I will suggest that Ki visit Choi with me, and if he doesn’t comply with my request, I will consider sending him back to England without giving him a chance to play against Brazil and Mali,” Hong said.

But things got even more awkward when Choi told the media on Friday that he didn’t want an apology.

“He [Ki] doesn’t need to do that because it’s already ancient history,” Kim was quoted as saying. “I think everyone can mock someone in his own diary. If coach Hong wants to put Ki in his lineup, he can do it without Ki saying ‘sorry’ to me.”

Football analysts tended to agree that Choi, who was criticized by the public during his term at the national team’s helm for its poor performance, doesn’t want to be back in the media spotlight. But Hong persisted, saying on Friday, “I still want to visit coach Choi with Ki when he arrives in Korea on Monday, and I respectfully ask Choi to accept his apology.”

Hong and Choi spoke on the phone yesterday and agreed not to have a three-party meeting. Hong said he would no longer press the issue. But Ki will probably release his own statement on his criticism of Choi at a press conference, a step Choi suggested on the phone with Hong.