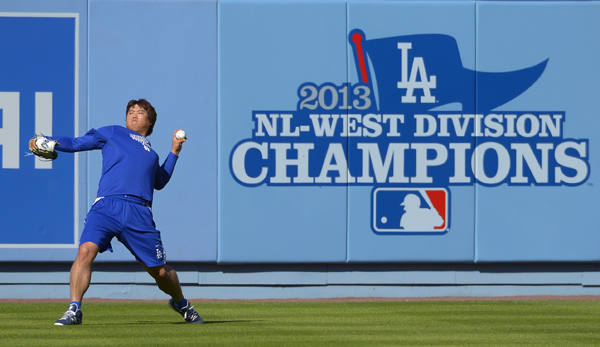 LOS ANGELES - The Los Angeles Dodgers will find out this morning in Seoul if their $36 million investment in Hyun-Jin Ryu will begin to pay off in the postseason. The 26-year-old rookie pitcher from South Korea starts Sunday evening (9:06 a.m. in Seoul today) in the Dodgers’ first home playoff game since 2009. Los Angeles is looking to take control of the best-of-five National League division series after splitting the first two games in Atlanta.

The Braves turned to their own rookie, 22-year-old Julio Teheran.

Ryu isn’t a typical rookie, having brought a wealth of experience from his native country when he signed with the Dodgers last winter. Teheran more accurately fits the description, with just four major league starts under his belt before this season.

Both the left-handed Ryu and right-handed Teheran went 14-8 during the regular season.

Teheran is facing the Dodgers for the first time. Ryu made two regular-season starts against the Braves, both no-decisions. He gave up one run in 7 2-3 innings the last time he faced Atlanta on June 7.

Ryu threw a bullpen session Friday in Atlanta, something he rarely did during the regular season. He hasn’t pitched since Sept. 29.

“Typically when I rest longer than normal, I always squeeze in a bullpen just to make sure that my body is responding the way I want it to,” he said Saturday through a translator.

Ryu drew an audience for the session that included manager Don Mattingly, and Stan Conte and Dr. Neal ElAttrache of the team’s medical staff. Ryu missed a turn in early September because of a back ailment and went 2-5 with a 3.30 ERA over his final seven starts.

But Mattingly said there were no concerns about Ryu’s health.

“He’s been pitching big all year long,” Mattingly said. “He’s able to exploit anybody that we want.”

In Boston, John Lackey has watched David Ortiz wreak destruction on playoff opponents before. He finally got a chance to see it from the same dugout.

“I like it a lot better on this side, that’s for sure,” Lackey said after Ortiz hit two homers to lead the Red Sox to a 7-4 victory over the Tampa Bay Rays on Saturday and give Boston a 2-0 lead in the AL division series.

Ortiz is the only player remaining from the 2004 Red Sox team that won the franchise’s first World Series title in 86 years. He was also a star of the ’07 team that won it all.

Jacoby Ellsbury had three hits and scored three runs for the AL East champions. Dustin Pedroia drove in three runs, and Lackey won his first postseason start since joining the Red Sox as a free agent in 2010.

Ortiz hit his first homer in the first inning, then his second in the eighth to chase Rays starter David Price.

Tampa Bay will need a victory in Game 3 on Monday in St. Petersburg, Florida, to avoid a sweep in the best-of-five series. The Rays won three win-or-go-home games this week just to reach this round, including Price’s complete game in the tiebreaker against Texas to determine the second AL wild-card team.

There was no such suspense for Ortiz’s first homer, which went into Boston bullpen to make it 2-0. Not even right fielder Wil Myers, who misplayed a Big Papi popup into a double in right field in Boston’s 12-2 win on Friday, could be blamed for that one.

With the situation not yet desperate, Price allowed seven runs on nine hits and two walks, striking out five. He took the mound for the eighth inning, but Ortiz hit his second pitch high over the Pesky Pole, and right-field umpire Chris Guccione signaled it fair.