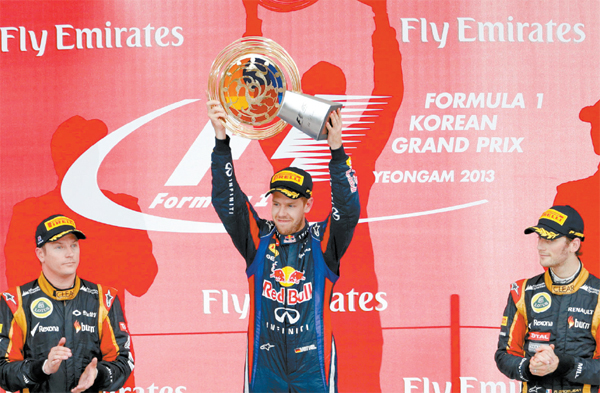 The German led throughout the race, but two safety-car periods and significant graining on his tires made for a hard-fought win.

He finished 4.2 seconds ahead of Lotus’ Kimi Raikkonen, who was just ahead of his teammate Romain Grosjean.

Vettel now leads the drivers’ championship by 77 points with only five races remaining and looks increasingly certain to win the title.

“It’s not great getting stuck behind the safety car, but all in all it was fantastic,” Vettel said. “It was good to have the safety car come out just a couple of corners before the pit entry,” he said.

That allowed Vettel to immediately stop without losing any time.

“I’m loving what I do - the team was fantastic,” he added.

His nearest championship rival, Fernando Alonso, finished in sixth place, all but ending the Spaniard’s hopes.

Sauber’s Nico Hulkenberg put in a superb defensive drive over the last 17 laps by holding off a queue of world champions behind him after the second safety-car period ended, finishing fourth to equal his career best.

It was Perez’s spectacular tire failure on lap 31 of 55 that brought out the safety car for the first time, and it was only in for a lap before it had to re-emerge because Force India’s Adrian Sutil collided with Red Bull’s Mark Webber, causing the Australian’s car to burst into flames.