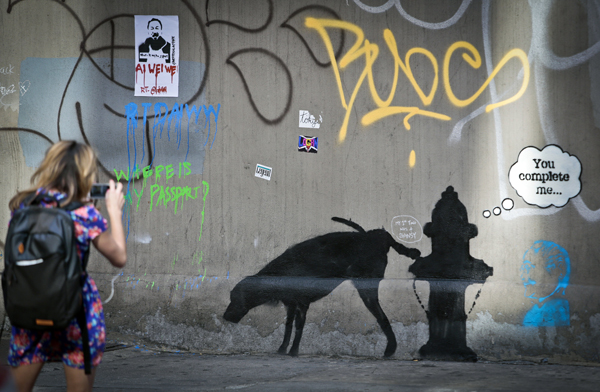 Graffiti by the secretive British artist Banksy, featuring a dog and a fire plug, draws attention on 24th Street, near Sixth Avenue in New York, on Friday. [AP/NEWSIS]

NEW YORK - Graffiti by the secretive British artist Banksy is turning up on the streets of New York City - and all over social media.

Banksy announced on his Web site that he is undertaking “an artists residency on the streets of New York” this month.

He’s posting pictures of his work on the Web site and fans are plastering the images all over Facebook, Twitter and Instagram. Though he’s not providing exact locations, those who spot the graffiti are spreading the word online to aid other fans in the treasure hunt.

Jennifer Hawkins, who runs a public relations agency in Chelsea, posted pictures on Facebook after finding “a Banksy sighting right out my office backdoor,” on 24th Street between Sixth and Seventh avenues.

Spray-painted on a building wall already defaced by illegible scrawls, the graffiti shows a black silhouette of a dog lifting his leg on a fire hydrant, with the words “You complete me” in a cartoon bubble.

“My favorite part of the whole thing is having the little groupies standing out there,” Hawkins said, referring to the small crowds of fans taking pictures.

The Daily Telegraph, a British outlet, has created an online map to track the images. The Museum of Modern Art posted links on its Twitter feed with a “Banksy watch” tag.

At least one of the works is gone already, altered by other graffiti artists and then whitewashed. The picture, done on a wall in Chinatown, showed a barefoot boy with a cap standing on another boy’s back, pointing at a sign that says, “Graffiti is a crime.”

Banksy is calling the New York City effort “Better Out Than In,” a reference to a quote by Impressionist Paul Cezanne, “All pictures painted inside, in the studio, will never be as good as those done outside.”

His Web site includes a toll-free number and an online “Click here to listen” button with commentary on each image that spoofs the pre-recorded cellphone tours commonly offered at museum exhibits. Banksy - who refuses to give his real name - began his career in the British city of Bristol spray-painting local buildings. His works now fetch thousands of dollars around the world.