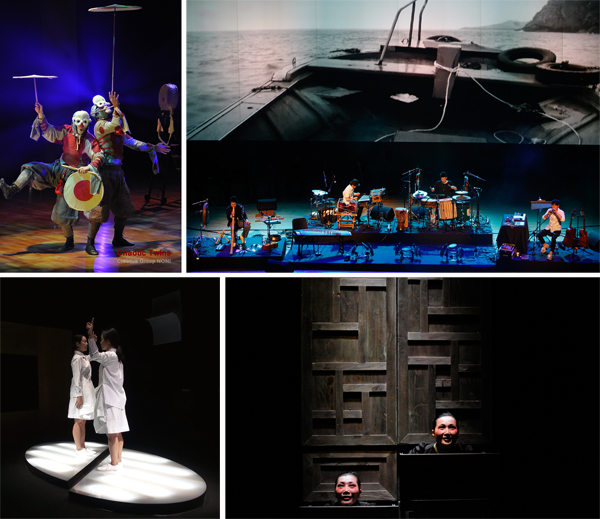 Some of the PAMS Choice selections for this year, from left to right: “No Longer Gagok” by Park Min-hee; “Chaotic Twins” by creative group NONI; “With Sea” by Gong Myoung; and “The Maids” by Sadari Movement Laboratory. Provided by the organizers

A five-day market will be held starting today in various venues in central Seoul, not to sell handicrafts or used goods for a bargain, but to present Korean-made performing arts to potential distributors from both home and abroad, in an attempt to help their continued growth.

It’s the ninth Performing Arts Market in Seoul (PAMS) this year, an event designed for promoting the “creation and production of activities in the performing arts” through showcases and booth exhibitions, as well as through holding various academic and networking programs.

Under the theme, “Cross+Contemporary, Continent, Culture,” Korea Arts Management Service invited about 200 performing arts professionals, distributors and presenters from across the world. Guests include Tony Grybowski, CEO of the Australia Council for the Arts, and Lopa Kothari, world music radio program presenter for BBC Radio 3.

One of the highlights in the annual event is PAMS Choice, where 10 performances are carefully selected by the organizers from 90 applicants, which then get showcased in front of hundreds of participants, including the performing arts professionals and distributors invited by the service from overseas.

“The PAMS Choice selections not only enjoy official showcase presentations throughout the event, but are also the subject of intensive promotional efforts at various international performing arts markets, with support provided for airfare and transportation when pieces are invited for performance overseas,” said Kim.

One reason Korea Arts Management Service emphasizes the PAMS Choice program is the huge disparity between the number of foreign performance works imported and the amount of Korean works exported.

In fact, last year’s PAMS Choice selections led to 125 performances staged overseas, up from 14 performances in 2006.

“I don’t mean that those performances were able to go abroad for the first time due to PAMS,” said Jeong Jae-wal, head of Korea Arts Management Service. “But thanks to PAMS, they were able to perform on meaningful and large stages like the World Music Expo, which is the biggest music expo in the world.”

Two among the 10 groups showcased at last year’s PAMS Choice - Su:m, a gugak ensemble, and Jambinai, a postrock-traditional music fusion group - have been invited to the showcase in this year’s World Music Expo, or Womex, which runs from Oct. 23 to 27 at Cardiff in Wales.

“It was a really great opportunity for us to be selected as one of the PAMS Choice teams last year,” said Kim Bo-mi, who plays the haegeum (two-string fiddle) in Jambinai.

“No matter how excellent your work is, it’s very important to have the opportunity to reveal it to the public and the world. For us, such a great opportunity came last year by being chosen as one of the PAMS Choice groups, and again this year at the Womex. For me, Womex was my dream stage as a young girl. I am so grateful for the opportunity.”

In addition to PAMS Choice, there are also international showcases in which groups from Canada, Malaysia, Spain and Taiwan are invited to perform during the event at the Sejong Center for the Performing Arts in central Seoul.

At the booth exhibition, 88 groups - 69 Korean and 19 foreign - will be set up, promoting their works on the second and third floors of the Main Hall “Hae” of the National Theater of Korea.

The booth exhibition runs for two days starting tomorrow and is open from 10 a.m. to 3 p.m. There are also networking sessions, round tables and speed-dating events organized starting from today.