From Korea, e-sports goes mainstream in the U.S.

From Korea, e-sports goes mainstream in the U.S. 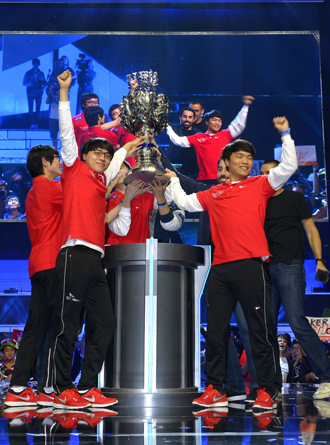 LOS ANGELES - When it comes to sports, the Staples Center in downtown Los Angeles is usually home to award-winning basketball and hockey. However, the behemoth arena hosted a very different kind of competition this weekend: the sold-out season three championships of “League of Legends,” a free-to-play video game that attracts more than 32 million players a month.

The virtual battle at the famous venue marked another milestone for e-sports.

The genre has yet to totally achieve mainstream success in North America, though it’s basically a national pastime in places like South Korea. That’s shifted over the past few years, as technology has evolved, Internet speeds have become more reliable and a generation of gamers have grown up watching competitive bouts on streaming video sites like Twitch and YouTube.

Unlike many games, “League of Legends” was created to be a sport. Each match features two teams of five players selecting superhero-like characters from a list of more than 100 champions, then attempting to slaughter each other and destroy their jungle arena bases. Riot Games mostly makes money from the free-to-play game by selling virtual items and characters.

“It’s a huge honor and privilege for us to put this on at a storied venue like the Staples Center,” said Marc Merrill, president and co-founder of “League of Legends” publisher Riot Games. “My partner and I grew up in LA, and we thought it would be appropriate to end season three at a fantastic arena where Kobe Bryant and the Lakers play and win world championships.”

Friday’s festivities kicked off with a musical performance by the Crystal Method, who composed an original song for one of the game’s champions. The electronic duo was joined by an orchestra, drummer Joe Letz, bassist Danny Lohner, cellist Tina Guo and former Limp Bizkit guitarist Wes Borland, who was clad in a white LED suit.

Merrill said booking the Staples Center was less about making a statement to outsiders about the ever-increasing popularity of “League of Legends” and e-sports and more about making die-hard fans proud of their favorite sport.