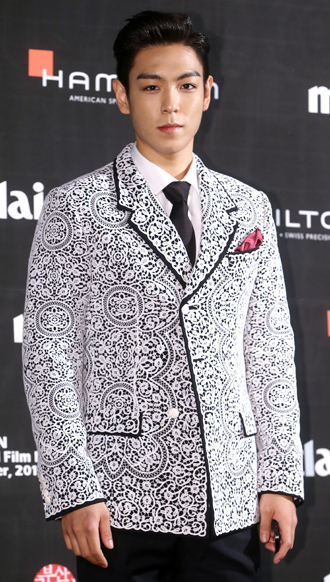 Big Bang’s T.O.P, who might start to be better known as “actor Choi Seung-hyun,” was awarded the rookie title in the Asia Star Awards at the Busan International Film Festival.

T.O.P was at the film festival to promote his movie “Commitment.” On Saturday, he received the award as one of the few Korean nominees in the Asia Star Awards’ four categories, although the Director Award went to Korean director Kim Byung-woo, a relative newcomer who has made a name for himself with the hit film “The Terror Live.” The Male Actor Award went to Hong Kong’s Jimmy Wang, and the Female Actress Award went to India’s Shahana Goswami.

In the film “Commitment,” T.O.P played a young assassin sent from North Korea to the South on a mission to save his sister. The movie created buzz during its six months of filming as T.O.P injured his hand and had to undergo surgery after being cut by glass fragments, while director Park Shin-woo walked off the set, and was quickly replaced by Park Hong-soo partway through filming.

T.O.P made his debut as an actor in 2010 with “71: Into the Fire” and was awarded the Best Rookie Award for male actors at the Blue Dragon Awards that year. “Commitment” is scheduled to premier on Nov. 6.