In the second quarter, Xiaomi, a Chinese smartphone manufacturer, overtook rival Apple. Its market share in the April to June period was 5 percent, surpassing Apple’s 4.8 percent according to Canalys, a market research group.

Xiaomi, which means “little rice,” isn’t a household name in the global market yet. But it has been gaining a strong following in China.

Although Korean smartphone giant Samsung Electronics still holds a dominant position in the world’s largest market with a market share of 17.6 percent, that is a drop from last year’s 20 percent.

It may be a long shot for the Chinese smartphone company, but it could become a major threat to Samsung. For now, Xiaomi’s competitiveness is in its affordable pricing, with low-end smartphones like the Hongmi or “red rice.”

But the industry is closely monitoring the quality of its premium Mi3 smartphone. The Mi3, launched last month, is equipped with IPS (in-plane switching) displays, which are installed only on high-end smartphones, as well as a 1.8 gigahertz Tegra 4 graphic card. Even including all these features, the smartphone is priced in the $336 to $410 range in China, half the price of the Galaxy S4.

“Chinese premium smartphones are no different from the world’s top-selling smartphones in both appearance and specifications,” said Park Rae-jung, a researcher at LG Economic Research Institute. “Because China is able to self-procure key parts domestically, it is just a matter of time until Xiaomi also expands to the overseas market.”

Steel is another industry in which newly-emerging Chinese companies are taking a larger piece of pie.

“Due to China’s technological development, steel product quality will become similar among Korea, Japan and China in next five years. In 10 years, there will be no technological gap,” said Min Dong-joon, material science and engineering professor at Yonsei University, at a steelmaking industry forum Sept. 26.

Min’s prediction that Southeast Asia would be one of China’s main overseas markets has already come true. The region is expected to purchase 46 million tons in 2015, and Indonesian imports jumped from $997 million in 2011 to $134.7 billion last year, up 35 percent.

“Korea’s main exports to Indonesia are steel and petrochemicals, but China has narrowed the technological gap,” said a source at Jakarta branch of the Korea Trade-Investment Promotion Agency.

China is catching up even faster in the metal and steel industry, surpassing 19 products, and 16 products in the electronics and machine industries.

From 2005 to 2010, only 22 Korean products lost their leads in sales, but that happened to 50 products during the following two years.

“In this competition, Korea is still a top dog in general, but the difference is shrinking fast,” said Chun Yong-chan, a researcher at the institute. “Korea has to have this ongoing change in consideration when negotiating a Korea-China Free Trade Agreement.”

Chinese companies succeed in the global market with technology developed during fierce competition in the gigantic domestic market. Haier, which became No.1 in the Chinese white goods market, particularly with its refrigerators and washing machines, also tops the world market. Haier refrigerators had a worldwide market share of 14.8 percent in 2012. It was the fifth year the company maintained the top position. 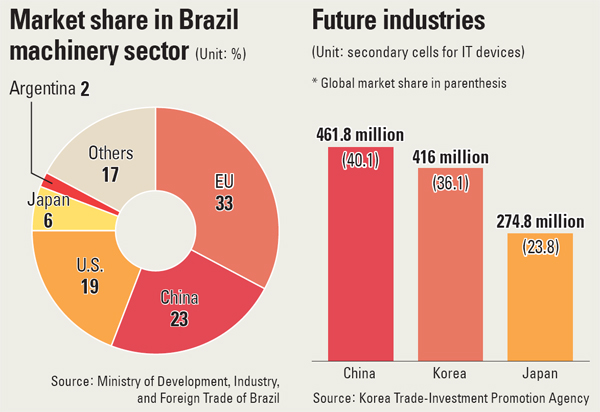 Construction machinery conglomerate Sany Heavy Industry topped the Chinese market last year with a 12.7 percent share of the market, surpassing Doosan Heavy Industries and Construction. Sany held only 1.2 percent of the domestic market back in 2006. It now has about 20 foreign branches and does business in 110 countries.

Chinese companies are popular in emerging economies, where demand is higher than in established economies.

In the Vietnamese online game market, which is worth $50 million, seven of the 10 most popular games last year were Chinese. Tenth-place Webzen was the only Korean company represented.

“China is slowing down in economic growth. But it still continues investing and reforming future industries while cutting down on excessive facilities,” said a source from a Korean company currently operating in China.

“The domestic economic atmosphere is totally different from that of Korea, which got cluttered due to mass tax investigations on conglomerates and their CEOs at trials.”

Forbes Magazine included four Chinese companies on its list of the world’s 100 most innovative companies in 2012.

No Korean companies were selected.