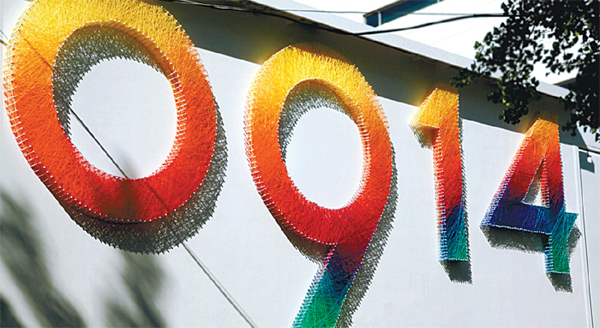 This colorful 0914 sign marks the construction site where the future flagship store of Simone, a Korean luxury handbag company, is being built. Simone has long been a major manufacturer for other luxury brands, but now it is looking to create its own retail line. Provided by the company

Close to Dosan Park, sandwiched between the massive Hermes building and a Ralph Lauren shop, heavy construction is underway. But the wall surrounding the construction site here, in this posh Apgujeong neighborhood in southern Seoul, is different from the usual drab, gray metal. Here, bright yellow and orange threads are weaved together to create a big sign that reads “0914.”

The number signifies the construction of a new building for the Korean handbag maker Simone. When it opens in 2015 - on Sept. 14, of course - it will become Simone’s flagship store.

Simone is not a familiar brand to consumers in Korea, even though people all over the world use its products. That’s because Simone mostly makes luxury bags for other companies - about 20 altogether, including famous brands such as Burberry, Givenchy, Michael Kors, Marc Jacobs and DKNY.

But now, for the first time since the company started in 1987, Simone is at last ready to launch its own line of bags using its own name.

Simone has steadily been making its brand known recently. Last year it launched the Simone Handbag Museum in its handbag-shaped building called BagStage, located in trendy Garosu-gil, the hottest street in Seoul these days, just about a kilometer west of the new construction site.

Starting tomorrow and running through the end of the year, the Simone Museum will be holding new exhibits, featuring visual artists Kim Yong-ho and Hong Jong-woo, who will use the research of psychiatrist Kim Hyun-chul to examine what women see in bags.

Kenny Park, Simone’s chairman and founder, said he wanted to turn the company from being just a contract manufacturer for other companies into a full service fashion company with its own premium fashion line.

“I wanted to express the know-how of our 300 or so employees and 30 years of experience in a brand of our own,” said Park. He was confident his company’s quality could rival anything made in Italy or France.

In fact, the company’s revenue in the last fiscal year was $593 million, and it projects this year it will make roughly $650 million, all from supplying handbags for the global market.

When you translate those numbers into the retail prices for Simone’s clients, those sales work out to about $5 billion.

In fact, Simone’s production accounts for 9 percent of all luxury handbag sales in the global market and 30 percent of the bags sold in the United States.

The difference between the money a supplier makes and what a retailer makes is the reason behind Simone’s decision to launch its own brand, even if it was a multiyear process.

“We have drawn paintings for our clients, but it is time for us to draw our own portraits,” Park said.

“It would be easier and less time consuming for us to take over an existing foreign luxury brand and then turn it around. But our goal is to establish an original brand that shows our Korean roots - even if it takes a long time to succeed.”

When asked what 0914 stands for, Park said it was the day that he met his wife.

Simone currently is trying to establish an original design, which is essential for a new brand to take root. Because Simone has been working with the world’s best luxury brands, the company is taking care not to look like it is copying its famous clients.

Currently, six Korean designers and three foreign designers are working on creating the Simone style. The company says it will focus on a single design each year, rather than flooding the market with varieties, in part to emphasize the uniqueness of its new brand.

The exhibitions at the Handbag Museum are a part of promoting its 0914 brand to the general public, but they are also held to get fresh inspiration through artists’ perspectives.

“We could easily succeed in a short period of time by marketing the brand with famous celebrities,” said Park. “However, we prefer to do it by creating a quality product, even if it takes longer than 20 years. I might not be able to see substantial achievements before I retire, but I still want to make ‘0914’ a brand that keeps our Korean roots alive.”