A view of the area around Yongsan Station, including large pools of rainwater, near the Han River where a development project was abandoned. Independent of the project, however, the district government has demanded that the site be cleared of hundreds of thousands of tons of toxic materials. By Kim Seong-ryong

Ever since the Yongsan Station development project in central Seoul collapsed earlier this year, the vast site, the size of 33 soccer fields, has been left to the weeds and rainwater. The area near Yongsan Station was supposed to have been developed by the Korea Railroad Corporation (Korail) and Lotte Tourist Development. But the Yongsan International Business District plan was abandoned when Korail canceled its contract with Dream Hub Project Financing Vehicle, a financing and development manager for the project.

Major local construction companies had scrambled to win bids for the largest development project in Korea’s history. Samsung C&T, GS Engineering and Construction, Hyundai Development Company, Kumho Industrial, Posco E&C, Lotte E&C and SK E&C were among the companies that made investments in the project. Now, they stand to lose the 200 billion won ($190 million) they put up front. The project started in 2001 and collapsed last April because of funding woes.

The 35-hectare (86.5-acre) area in the center of the city has an estimated value of about 8 trillion won, but for now it is sitting idle, making weeds instead of investments grow.

Since 1905, the area had been used as a railroad marshalling yard and depot, and the underground water there is polluted with oil and other toxic chemicals. The soil is also contaminated, environmental experts say. About 388,000 cubic meters (13.7 million cubic feet) of industrial waste is buried there, the equivalent of all the industrial waste Korea generates in two weeks. Adding the amount of soil that has been affected by the contaminants to that volume, toxic materials at the site total 690,000 cubic meters. 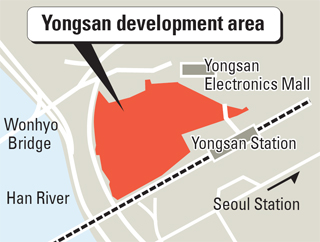 Korail said that the demolition work on the pre-existing structures on the site has been completed, a job that included carefully dismantling some of them for relocation elsewhere. But that’s a small comfort because only about 5 percent of the contaminated land has been cleaned up.

The level of pollution is severe. The oil contamination level in parts of the soil is estimated to be 41,415 parts per million, 83 times higher than the Soil Environment Conservation Act’s acceptable level for residential areas.

In 2011, Dream Hub estimated the cost of removing railroad-related facilities and cleaning up the soil at 290.5 billion won. Nearly half, or 142.3 billion won, was to be spent on cleaning the soil.

Removal of waste buried underground was estimated to cost 113.3 billion won, while tearing down existing facilities was to have required 34.9 billion won, according to a 2011 study by the developer.

The cleanup came to a halt when the project was canceled in April.

“The underground water at the Yongsan land heads toward the Han River,” said Jang Yun-yeong, an environmental engineering professor at Kwangwoon University. “And the flow of underground water here is faster than in other areas.” If the contaminated area is abandoned, he said, it would cause contamination in the Han River and its surrounding areas.

About a dozen temporary buildings were erected for the cleanup. In the on-site office of the company in charge of the cleanup, only two employees were working. They said the operation started in July 2011 but was halted last September because the company did not receive a 27.1 billion won payment for the job.

The company claims it is owed more than 100 billion won for the work it has already done and that it had no choice but to stop when it was not paid.

The company claims it installed steel sheet pilings 3 meters to 20 meters (9.8 feet to 65.6 feet) in depth along the perimeter of the project area to prevent contaminated underground water from flowing to the Han. The sheets are hammered into the ground and overlap to form a barrier against water flow.

Professor Jang said the measure wasn’t enough. “Although the steel sheet pilings are there, they do not completely block the flow of the contaminated underground water,” he said.

After the cleanup was suspended, the Yongsan District Office sued Korail in June for not following through on the cleanup orders the office issued. “We sued them because it has been more than four years since the soil remediation order was issued by the district office,” said Choi Jae-rin, head of Yongsan District’s Environment Instruction team.

According to the Soil Environment Conservation Act, when a local government issues a soil remediation order, the companies responsible should finish the job within two years and can extend the period for two more years with permission. The district office issued the order to Korail in May 2009.

Korail says it has good reasons for not following through.

“Dream Hub owns 70 percent of the area, so we cannot do the work unilaterally,” a Korail official said. “We will restart the program as soon as we regain the remaining property.”

Earlier this month, Dream Hub signed 30 percent of the site back to Korail through a deed title. It is not clear when it will regain the remaining part of the site.

And it’s also a mistake, an expert said, to link the cleanup to the larger development plan; the site is contaminated no matter what is or isn’t on it. “Leaving the contaminated area as it is will affect the surrounding areas in the long-term,” said Lee Jin-yong, a geology professor at Kangwon National University. “We have to pursue the remediation regardless of the progress of the development project.”