I’m sorry for mocking my ex-coach on SNS, Ki says

I’m sorry for mocking my ex-coach on SNS, Ki says 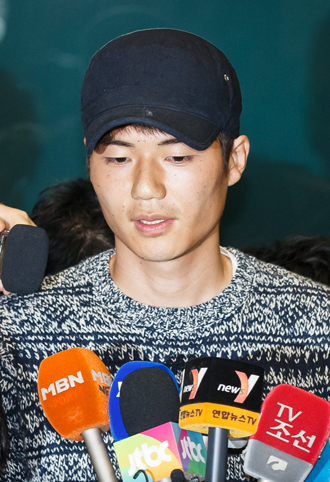 Ki arrived at Incheon International Airport yesterday to join the national football team ahead of friendly matches against Brazil and Mali.

Ki was surrounded by about 100 reporters and discussed the scandal for about three minutes before he headed to the National Football Center in Paju, Gyeonggi.

The Korea Football Association said the team’s head coach, Hong Myung-bo, will have a press conference regarding the two friendly matches this afternoon and Ki will likely appear with Hong.

“I feel responsible for what I have done,” Ki said. “I sincerely apologize to coach Choi Kang-hee for the SNS thing and for not making a sincere apology earlier. The reason I’m making this apology this late was because I thought I should personally apologize to Choi, not through media. I really had a hard time in the last two months. I will behave more carefully as a member of the national team.”

Ki came under fire in July after a football columnist disclosed Ki’s secret Facebook account, where he apparently taunted Choi. Ki left messages that derided Choi’s remarks from interviews with local media outlets such as one in February 2012, in which Choi dismissed the level of the rest of the Scottish Premier League apart from its top club, Celtic, likening it to that of the National League, Korea’s third-tier football league. Former Celtic player Ki sneered, saying, “Thank you for selecting someone like me who plays in a National League.”

Some of the messages were directed at Choi’s decision not to start him and contained an outright warning. “I was so shocked and disappointed that I couldn’t play from the first half,” Ki wrote after Korea’s third-round World Cup qualifier against Kuwait in February 2012.

Ki seemed like he was trying to show a “sincere attitude.” He kept his hands folded on his lap and his hair was changed to black. He dyed his black hair gold earlier this season and kept it that way until last weekend. When the messages were disclosed by the football columnist, he released a short statement apologizing for his behavior through his agent, but the public criticized him for not apologizing to Choi in person.

“I had a tough time in the beginning of the season because I was loaned to Sunderland and that was the reason I wasn’t able to come back to the country to apologize to Choi. I really want to see him personally to ask his forgiveness for my behavior. I’m not doing this to make my feeling better.”