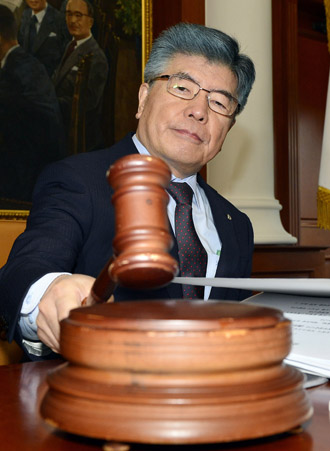 The Bank of Korea needs a successor to Gov. Kim Choong-soo with a global focus and a firm grasp of international economics, given the nation’s reliance on trade, said an adviser to the administration of President Park Geun-hye.

“We need people like Kim who can quickly capture the full picture of the global economy when making a key policy decision,” said Lee Il-houng, 55, head of the Korea Institute for International Economic Policy. “South Korea is a very open economy.”

Any successor to Kim, whose four-year term ends March 31, will face challenges from record household debt and a stagnant property market to the prospect of market volatility from an eventual reduction in U.S. Federal Reserve stimulus. While the governor can be reappointed for a second term under the Bank of Korea Act, only two of 23 governors before Kim served more than four years, in the 1950s and 1970s.

Shin Hyun-song, a Princeton University professor who is set to become research chief at the Bank for International Settlements in May, was the top pick for the next governor in a survey of experts by the Korea Economic Daily. Seventy economists, academics and government officials were asked to choose two favorites, with Shin receiving 24 votes, followed by former BOK Senior Deputy Governors Park Cheul with 14 and Lee Ju-yeol with 12.

“The BOK’s global status has advanced much under Kim’s leadership, which is an important asset, especially in times of crisis. This push toward globalization should be further enhanced,” said Lee, who was previously an International Monetary Fund chief resident representative in China.

Asked if he is interested in becoming governor, Lee said, “I just got new jobs here and have a mission to complete. I will try my best to make full use of my international experience and professional expertise to contribute to President Park’s vision of Korea as an advanced and responsible player on the global stage.”

While Lee’s name wasn’t mentioned in the survey, some observers said he could still be a candidate.

“Lee can be a dark horse given his expertise on the global economy, a key requirement for any central banker following the global financial crisis,” said Yoon Yeo Sam, an analyst at Daewoo Securities Co. in Seoul. “When President Park appointed her first finance minister in February, Hyun Oh-seok was a big surprise. This could happen for the Bank of Korea top post.”

Lee joined the Korean government in May as a Group of 20 sherpa for Park and took another post in August to head the Korea Institute for International Economic Policy, a state-funded research institution. Last month, he accompanied Park to the G-20 summit in Russia, her debut at the forum.

Lee worked for the International Monetary Fund from 1989 to 2013, first as an economist in Washington, D.C., and then as an adviser in Vietnam and China. He graduated from the London School of Economics and received a master’s degree at Essex University and a doctorate in economics at Warwick University in Coventry.

While at the IMF, Lee wrote research papers, including “Monetary Transmission of Global Imbalances in Asian Countries” (2010) and “Two Sides of the Same Coin? Rebalancing and Inclusive Growth in China” (2013).

South Korea’s economy faces potential risks, with the U.S. government grappling with its first partial shutdown in 17 years and the Fed poised to reduce its bond-buying programs, Lee said.

“For South Korea, the challenge in the short run is to sail unscathed through possible financial instability that might arise from any tapering,” he said. “More importantly, the task for the long term is how best to reposition the country in this fast-changing global economic landscape.”

The Finance Ministry cut its growth estimate for next year to 3.9 percent from 4 percent last month when it unveiled its 2014 budget draft. The BOK will provide its latest outlook on Oct. 10 when its policy board will probably hold the benchmark interest rate at 2.5 percent after a cut in May, according to a Bloomberg News survey. It forecast a 4 percent expansion for 2014 in July.

“Based on past experience, the U.S. government shutdown will likely have only a limited impact on the real economy, which will continue to improve,” Lee said. “The Fed will make sure that any QE tapering will take place smoothly given its potential impact on U.S. as well as on global financial markets.”

The global economy faces a slow expansion even after policy makers around the world extended monetary and fiscal support, he said. Macroeconomic policies can’t solve structural problems, he said.

“The era of super-low interest rates is nearing an end,” Lee said. “The policies undertaken since the global financial crisis can’t continue forever and will have to be normalized soon.”