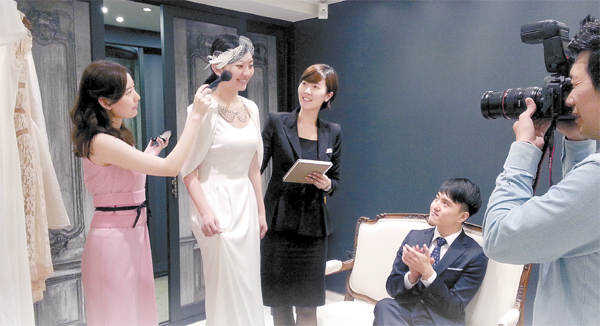 Chinese brides are rushing into Korean shops to get the same services as their favorite Korean celebrities.

They can choose a wedding dress made by the same designer who made a dress for actress Lee Yo-won of the SBS drama “Golden Empire” when she got married. They get their makeup at the beauty shop where actress Song Hye-gyo of the SBS drama “That Winter, the Wind Blows” is a regular. They take wedding photos where former TV announcer No Hyun-jung took hers.

Korea’s luxury hotels are playing a major role in this trend by offering Chinese visitors such services as it is hard for traveling individuals to pre-arrange reservations at local shops from overseas. In return, the visitors stay at their hotels.

Until recently, five-star hotels were not so active in luring Chinese customers. However, it has become difficult for them to ignore “big shots” from China spending over 10 million won ($9,323) on wedding photos or other bridal activities.

The package includes everything needed to take luxurious wedding photos at a studio, including renting a designer wedding dress and getting celebrity-like makeup.

Such package deals, which cost up to 10 million won, were designed because many of Chinese visitors want to get the same services that their favorite Korean stars get in Korea. Two hotels included the most luxurious wedding shops that feature high-end dresses made by designer Lee Myung-soon, and top-tier beauty salons such as Kim Chung-kyung Hair Face.

After the Chinese customers visit these places to prepare for their perfect wedding photo shoot, an assistant fluent in Chinese will accompany them at a photo studio at all times, which differentiates the InterContinental package from the others.

The hotel, which had been lukewarm in marketing to Chinese customers, has made up for lost time with more aggressive measures.

For the first time, it hired a Chinese sales manager and set up a task force in May to come up with more detailed strategies to satiate Chinese customers. It set up a 24-hour customer service in cooperation with local travel agencies in China, and hired Korean students studying in China to promote its luxury deal.

Other luxurious hotels have followed suit.

The Ritz-Carlton Seoul, one of the city’s most prestigious hotels, produced a map of Seoul written in Chinese this year after Chinese customers expressed their frustration over maps written only in English and Korean.

Chinese customers contribute profits to the hotel, too, as they spend between 3 million won and 20 million won at dermatologists’ or plastic surgeons’ clinics at the hotel.

The hotel has employees, who are fluent in Chinese, provide one-on-one service as it has acknowledged the necessity to cater to its Chinese customers.

“Even when a customer feels some discomfort with their teeth, an employee fluent in Chinese brings the customer to the nearby doctor’s office for medical treatment and then escorts the guest back to the hotel,” said a hotel official.

Since Oct. 1, the start of the National Day of the People’s Republic of China, the hotel has been greeting customers wearing hanbok and other traditional Korean garments. It decorated its lobby in red and gold, which are colors favored by the Chinese.

The hotel’s global headquarters is also contributing to the marketing campaign. Among luxury hotel chains, it is the first to open an account on social network services popular in China, and its Web sites were redesigned with a blue background, as blue in China represents eternity and wisdom.

Prestigious hotels in northern Seoul have also gotten in on the act.

The Sheraton Grande Walkerhill Hotel recently began providing menus written in Chinese at its restaurants and added some Chinese cuisine to its breakfast buffet and room service menu.

Also, the Walkerhill Duty Free Shop lays out a red carpet when it holds a showing of luxury watches and jewelry so that Chinese customers, who particularly prefer buying luxury watches, can feel like they are at a fashion show. The store also hosted an exhibition of time pieces made by Piaget, a luxurious Swiss watchmaker.

Further, the store applies other marketing tactics to target its Chinese customers. Considering the Chinese love the number eight, the store has many products priced for $8, $88 or $888, and provides additional gifts when they purchase more than $888 worth of goods. Even the discounts at the store are set at 8 percent.

While some come for a pre-wedding experiences or luxury shopping spree, others come for medical treatment.

The Imperial Palace Seoul has customized its services to cater to Chinese coming to Korea to tour beauty clinics in the Apgujeong-dong or Cheongdam-dong areas of southern Seoul. The hotel has added food that is frequently eaten at Chinese homes so that it feels like home after the customers receive their medical treatments.

“To attract more VIP customers from China as the number of them is growing, we are introducing more luxurious packages in which customers can have a ride in a luxury sedan or with some other benefits,” said Lee Geon-woo, a director in charge of marketing for Chinese VIPs.

While hotels show their zeal over attracting more Chinese guests, Korea’s large retailers have also been eyeing spending habits of the Chinese and are working with the hotels to boost their sales.

Hyundai Department Store offers a one-on-one personal shopping service to guests who use InterContinental franchises’ wedding packages. The store will deliver all the goods the customers bought from the in-house shops at the store and provide a mileage card with which customers can accrue rewards.

Galleria Department Store, one of the most popular shopping venues among Chinese VIPs, has started to give out a voucher only for Chinese VIPs for the first time this year.

Although Korea’s high-end market is leading the way in catering to Chinese spenders, many smaller retailers and outlet malls are also enjoying increased sales.

Lotte Mart said that it had seen a 57 percent on-year increase of sales from Chinese consumers this year at its Seoul Station branch in Yongsan, central Seoul, while sales from Japanese consumers have dropped by 30 percent.

E-Mart also had a 5.6 percent increase in sales at its two branches in Jeju, where many Chinese visit, while its sales from its 148 stores nationwide rose only 0.9 percent.

“While we have restrictions in operation due to the mandatory closure for two days each month, sales coming from the Chinese are supporting the performance,” said an official at E-Mart.

The purchasing power of the Chinese has reached outlet stores near the metropolitan area. Of the 136,000 foreigners who visited the Paju Premium Outlets in Paju, Gyeonggi, between January and August, more than 45,000 were from China.

To boost sales, many retailers are striving to provide promotions that only apply to foreigners.

Lotte Mart provides a discount of up to 30 percent on nine popular products to customers bearing foreigners’ coupons until the end of this year. It also provides souvenirs such as cookies to foreigners who buy more than 100,000 won worth of goods at 12 of its branches nationwide during China’s National Day.

Lotte Mart is also striving to make it easier for its foreign customers to spend more.

For example, it introduced a service in which customers can make a purchase based on a pre-set currency exchange rate when foreigners buy goods with credit cards. The aim of the service is that customers will pay the amount they expect to pay, rather than being at the mercy of an exchange rate which may be different when they pay their credit card bill.

“We are preparing a variety of marketing activities so that Chinese tourists can have the best service,” said Park Yun-seong, managing director of Lotte Mart’s customer care service.