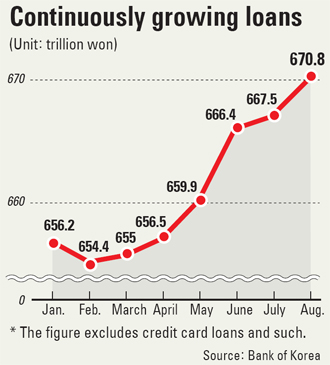 Amid rising jeonse prices, household debt in August continued to grow for the sixth consecutive month.

According to the Bank of Korea (BOK) yesterday, total debt, excluding credit cards, as of the end of August amounted to 670.8 trillion won ($625.4 billion). That was 3.3 trillion won more than in July and 3.2 percent higher than a year ago.

Other debts saw sharper growth. In July, total debt was 900 billion won more than the previous month, while August debt was 2.1 trillion more than in July.

Overall household debt has been on a growth spurt since a slight decrease in February and has set new records every month.

Thanks to loose monetary policy, the debt situation is not in a critical state. However, there have been growing concerns that the continuous expansion of debt is a ticking time bomb and needs restructuring. Once the central bank tightens monetary policy, which many experts project will happen early next year, the debt burden will rise, especially for low-income households.

The central bank has kept the key borrowing rate at 2.5 percent after lowering it from 2.75 percent in May to support the government’s campaign to stimulate the economy.

While the interest rate has remained low, overall debt, including credit cards, tied the all-time record of 980 trillion won as of the end of June. Market experts project that by the end of the year it could hit 1,000 trillion won.

Debt may rise again in September as jeonse prices continue to surge despite government efforts. The lack jeonse supply, which is a significant reason for the ever-growing debt, has been a major concern for the Park Geun-hye administration.

Jeonse has been rising for 57 straight weeks, or 14 months.

According to the central bank, commercial bank loans in August were 1.8 trillion won more than in July at 472.6 trillion won. This was an increase from the 100 billion won in loan debt added in July.

Debts from non-banking institutions like savings banks and credit unions went up 1.4 trillion won to 198.2 trillion won, after adding 1 trillion won in July.