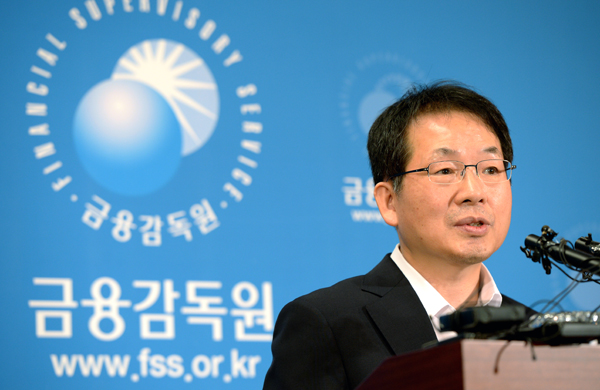 Kim Gun-sop, senior deputy governor at the Financial Supervisory Service, briefs reporters yesterday on the decision to request a prosecution investigation into the Tongyang Group owner family. “We have found some shareholders suspected of being involved in irregular practices,” he said. [NEWS1]

The crisis involving debt-ridden Tongyang Group is escalating, with the country’s financial regulator announcing yesterday it will request a prosecutorial investigation into the owner family of the conglomerate, including Chairman Hyun Jae-hyun.

“We were able to find irregularities taking place involving some major shareholders of Tongyang Group,” said Kim Gun-sop, senior deputy governor at the Financial Supervisory Service yesterday. “We have dispatched additional inspectors to look into the case, and at the same time we have decided to ask the investigation authority for an investigation.”

Kim, in a press briefing yesterday, added that since Sept. 30 the FSS has been conducting a special inspection into Tongyang Group, including its brokerage arm Tongyang Securities, and has been looking into financial allegations raised by civic groups and the media.

“Although we’re not able to elaborate on the details because the inspection is ongoing, we have found some shareholders suspected of being involved in irregular practices and illegal trading in regard to issuing commercial paper,” Kim told reporters.

There has been growing criticism of Tongyang Group for selling high-risk bonds to individual investors until just before the financial collapse of five affiliates that filed for court receivership last week. Industry sources note that Chairman Hyun was the one who ordered Tongyang Securities employees to advise consumers to make investments, especially into Tongyang Cement in which the debt to equity ratio was relatively lower than other group affiliates.

There was a high degree of speculation among investors and Tongyang Securities employees that Tongyang Cement would be the last - if it does at all - to file for court receivership program. Many had expected the group to push forward with a voluntary workout program for Tongyang Cement that would involve creditors collaborating with management to reduce the debt level instead of a court pushing for restructuring.

There also is growing speculation that Hyun’s wife, Lee Hae-kyung, who is the group’s vice chairwoman and daughter of founder Lee Yang-koo, allegedly withdrew billions of won from a safe-deposit box at Tongyang Securities last week. The FSS is analyzing video footage from a closed-circuit television handed over by the brokerage’s labor union.

“From July to September, Tongyang Corporation [the de facto holding company of Tongyang Group] issued a total of 157 billion won [$146.3 million] worth of asset-based commercial paper sold to consumers through Tongyang Securities,” the coalition said in a statement. “The commercial paper was issued by using shares of Tongyang Cement as collateral.

But Tongyang Cement on Oct. 1 unexpectedly filed for court receivership, and if the program is accepted commercial paper that has Tongyang Cement as collateral would become worthless.

A group of retail investors is also expected to hold a rally tomorrow in front of Financial Supervisory Service headquarters in Yeouido, western Seoul, to urge the country’s financial regulator to protect their assets. Last week, the group gathered in front of Hyun’s residence to protest a lack of responsibility by the owner family. Tomorrow’s rally is expected to blame the country’s financial regulator for not preventing the Tongyang Group crisis and failing to regulate Tongyang Securities’ sale of commercial paper and corporate bonds to retail investors in September.

Lawmakers have also started to get involved.