Djokovic gets revenge against Nadal

Djokovic gets revenge against Nadal 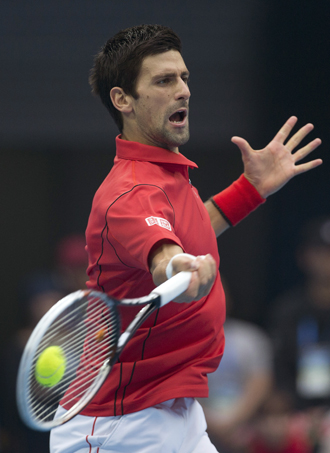 Novak Djokovic hits a shot at the final of the China Open tournament Sunday. [AP/NEWSIS]

Having lost his top ranking to Rafael Nadal, Novak Djokovic showed he can still compete with the Spaniard one-on-one.

A day after Nadal made sure of wresting the No. 1 ranking away from Djokovic, the Serb gained some consolation by beating his big rival 6-3, 6-4 victory Sunday to claim his fourth China Open title in five years.

Nadal only needed to reach the final in Beijing in order to replace Djokovic as No. 1 when the new rankings come out on Monday.

But the Serb handed Nadal his first loss on hard court this year, breaking him in the second game of the first set and again in the first game of the second. He served four aces to Nadal’s two and hit 19 winners to the Spaniard’s nine.

“I needed this win today. I really wanted to get my hands on the trophy and win against Nadal who has been the best player so far in 2013,” said Djokovic, who had lost their last three meetings, including in the U.S. Open final.

Djokovic credited his almost flawless serve for the win this time, as well as his ability to keep calm. He said playing doubles also helped sharpen his game and build his confidence.

“That’s crucial to get that necessary confidence when you’re playing top guys, somebody like Nadal, who loves to get into the rally, loves to be in his comfort zone and I was always trying to move him around the court and I’ve done pretty well,” Djokovic said.

Djokovic has yet to lose a match in Beijing.

“Center Court is exceptional. I enjoy it, and I try to cherish every moment that I spend here. And the results are showing how much I really enjoy being here and enjoy playing in this tournament.”

Nadal, the reigning French Open and U.S. Open champion, has had a dominant year since returning in February from a seven-month layoff due to a left knee injury. He has won 10 titles and reached 12 finals overall, compiling an ATP Tour-best record of 65-4 on the season.